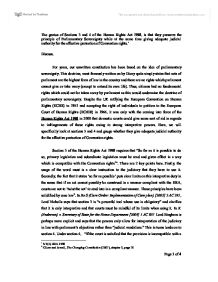 The genius of Sections 3 and 4 of the Human Rights Act 1998, is that they preserve the principle of Parliamentary Sovereignty while at the same time giving adequate judicial authority for the effective protection of Convention rights.

The genius of Sections 3 and 4 of the Human Rights Act 1998, is that they preserve the principle of Parliamentary Sovereignty while at the same time giving adequate judicial authority for the effective protection of Convention rights.' Discuss. For years, our unwritten constitution has been based on the idea of parliamentary sovereignty. This doctrine, most famously written on by Dicey quite simply states that acts of parliament are the highest form of law in the country and there are no rights which parliament cannot give or take away (except to extend its own life). Thus, citizens had no fundamental rights which could not be taken away by parliament as this would undermine the doctrine of parliamentary sovereignty. Despite the UK ratifying the European Convention on Human Rights (ECHR) in 1951 and accepting the right of individuals to petition to the European Court of Human Rights (ECtHR) in 1966, it was only with the coming into force of the Human Rights Act 1998 in 2000 that domestic courts could give some sort of aid in regards to infringements of these rights owing to strong interpretive powers. Here, we will specifically look at sections 3 and 4 and gauge whether they give adequate judicial authority for the effective protection of Convention rights. ...read more.

[2002] 1 AC 45 the House of Lords held that in rape cases, cross-examination of victims with regards to prior sexual history was both allowed and admissible in the interest of the right to a free trial under Article 6 of the ECHR. This case is a clear example of courts interpreting existing law with regards to convention rights and allowing convention rights to prevail. In this case, the court also indicated that they were prepared to read down the legislation to achieve compatibility and only if this was not possible, then a declaration would be issued. Ghaidan v Godin-Mendoza [2004] UKHL 30 concerns the Rent Act 1977. In the case of the death of a partner of either a heterosexual marriage or of a situation where a heterosexual couple where cohabitating despite not being married, the Act allowed the tenancy to pass to the surviving partner. Here, House of Lords held that the Act was in infringing both articles 8 and 14 of the ECHR in discriminating between heterosexual and homosexual couples and thus under the section 3 obligation, read into the Act to allow for homosexual couples. This case goes further in showing the effectiveness of section 3 in protecting convention rights as it could not possibly have been the original intention of parliament to allow for homosexual couples as homosexuality was an offence at the time the legislation was initially passed. ...read more.

In conclusion, it is clear that sections 3 and 4 of the Human Rights Act 1998 do preserve parliamentary sovereignty in name. However, judges have interpreted legislation creatively under this section sometimes even contrary to the intention of parliament at the time of legislation. They have also issued declarations of incompatibility that have caused changes in legislation. To this extent, these sections do allow for reasonably effective protection of human rights. There are however instances of the protection afforded by these sections failing and ultimately, they do not allow for complete protection. It is likely that any further changes might undermine parliamentary sovereignty which would probably be unthinkable at hits time. Sources 1. Oliver and Jowell, The Changing Constitution (2007), New York, Oxford University Press 2. Fenwick and Phillipson, Text, cases & materials on public law & human rights (2003), London, Cavendish Publishing Limited 3. http://www.dca.gov.uk/peoples-rights/human-rights/pdf/decl-incompat-tabl.pdf 4. http://www.justice.gov.uk/about/human-rights.htm 5. http://www.publications.parliament.uk/pa/jt200708/jtselect/jtrights/173/17305.htm#a3 (Thirty-First report of the Joint Committee on Human Rights) 1 S 3(1) HRA 1998 2 Oliver and Jowell, The Changing Constitution (2007), chapter 3, page 70 3 S 4(2) HRA 1998 4 Ibid, S 4(6)(a) 5 Fenwick and Phillipson, Text, cases & materials on public law & human rights (2003), part 6, chapter 1, page 884 6 Application No 13378/05, Judgment, 12 December 2006 ?? ?? ?? ?? Page 1 of 4 ...read more.