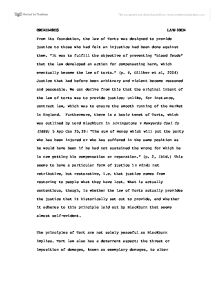 The Justice of Torts. From its foundation, the law of Torts was designed to provide justice to those who had felt an injustice had been done against them.

From its foundation, the law of Torts was designed to provide justice to those who had felt an injustice had been done against them. "It was to fulfill the objective of preventing "blood feuds" that the law developed an action for compensating harm, which eventually became the law of torts." (p. 4, Giliker et al, 2004) Justice that had before been arbitrary and violent became reasoned and peaceable. We can derive from this that the original intent of the law of torts was to provide justice; unlike, for instance, contract law, which was to ensure the smooth running of the market in England. Furthermore, there is a basic tenet of Torts, which was outlined by Lord Blackburn in Livingstone v Rawyards Coal Co (1880) 5 App Cas 25,39: "The sum of money which will put the party who has been injured or who has suffered in the same position as he would have been if he had not sustained the wrong for which he is now getting his compensation or reparation." (p. 2, Ibid.) This seems to have a particular form of justice in mind; not retributive, but restorative, i.e. that justice comes from restoring to people what they have lost. What is actually contentious, though, is whether the law of Torts actually provides the justice that it historically set out to provide, and whether it adheres to this principle laid out by Blackburn that seems almost self-evident. The principles of Tort are not solely peaceful as Blackburn implies. ...read more.

In this case, the Court inflicted damages on a newspaper company who had printed the truth.1 In effect, NGN Ltd's right to freedom of speech had been suppressed by the Courts. One could question whether this could fall under defamation; but since truth is a complete defence to defamation, again, it seems that Mosley did not contend that what the Newspaper had published was true or else he would surely have pressed for libel. In a free democracy, the freedom of speech and of the press is of paramount importance. Key historic legal articles outlining human or natural rights have named it as a natural or human right2345. Yet, recent advancements in the English law of Torts have quashed this basic democratic right in the favour of the protection of people's privacy. A clear distinction must here be drawn. Protection from defamation too, is an English common law right6. Yet privacy does not concern defamation because defamation is a statement made that was untrue. Hence the absolute defence of truth in defamation law (p. 678, Steele, 2007) which protects people's reputation from untruthful comments that may (or, as we will see, may not) have harmed them. Privacy is used by individuals who do not wish to meet the consequences of actions and so intend, by the use of the Courts, to suppress one of the very basic tenets of a democracy: the right to publish in words or to say in public that which is true. When concerning the provision of justice by Tort law, this plain fact imposes an intolerable injustice. ...read more.

(Ibid.) Nonetheless, this claim should not be taken in the improper context. Conaghan et al criticise the sort of justice that Tort provides. In fact, for their criticisms to be leveled, it must be assumed that Tort provides a sort of justice that they disagree with otherwise their critique would necessarily not be leveled at the form of justice presently supplied. So even authors who disagree with Tort can recognise that it does provide some form of justice. The different theories of philosophical distributive justice; from Rawls to Nozick propose justice through deontology; that is, a correct moral position to take. Some authors; Richard Posner for instance, posit a theory of Tort law that is strictly designed for economic efficiency (p. 234, Rabin, 1990.) Yet that so much of a debate exists around the way in which Torts provides implies with a reasonable strength that Torts provides at least some form of justice; the argument over whether or not it should provide any conception of justice receives a great deal less atttention. In summary, Torts does provide a form of justice but there is not always clarity on what sort of justice it provides. Largely, its method of distributive justice places costs on those who risk taking them, and its method of corrective justice places exemplary costs on actions that are deemed not necessarily wrong but on the whole undesirable. In addition to this, in recent years, Tort has expanded in a way that has attacked other areas of what we might call "public justice", that is, freedom of speech. Torts does provide justice: however, that justice is one that is likely to be contentious for a great deal of time. ...read more.