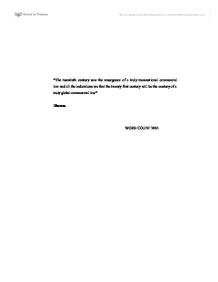 the resurgence of transnational commercial law

With the passage of time this conducive environment led to increased international commerce, which in turn increased the issuance of transnational commercial laws in order to maintain the security element and the high level of the regulations of these fairs 10. 3. The resurgence of transnational commercial law in the 20th century. 3.1 The impact of political and economical changes on transnational commercial law It is conceded that the twentieth century saw a considerable number of radical changes on several levels in the whole world. On the political level, world war I and the second besides the de- colonisation decades (between 1960s and 1970s) were enough to change the political map of the world. As a result of these changes, three worlds were formed. In addition, the collapse of the Soviet Union in 1990s. And the enormous increase in the number of members of the United Nations ( from 50 states in the 1950s to 188 states in the late 1990s). These political events in one way or another, have contributed in forming a new transnational commercial law. The advent of a number of markets and its legal regimes could be seen also as a prelude to the legal revolution. This revolution stemming manly from national laws, foreign laws and transnational law which were devised by international formulating agencies. As a result, considerable numbers of transnational laws were drafted in the first half of the 20th century by relatively a limited number of states, as many states had not acquired their independence yet . 11 In the second half of the 20th century, in the wake of many countries gaining their independence and formulating their own legal systems, as well as an increased incidence in emerging markets, the desire to comprise a new neutral transnational commercial laws has been increased. The needs for unified trade regulations sensitive to natural diversity among these markets became more urgent particularly with the buoyancy of international trade in that time.12 This desire has been interpreted later primarily by ...read more.

Whereas the lex mercatoria lacking of such international acceptance, besides that lex mercatoria is still unwritten.22 In the light of these shortcomings, it is fair to say that the capability of these methods to achieve a global commercial law are under consideration. 5. Conclusion. This assay has briefly explored the nature of the transnational commercial law as a prelude and a condition to the consideration of Manifestations of ,and reasons for the return of international law in the last century. Also, it examined the allege that the 21th century could be the century of global commercial laws. Fourth sets of conclusions can be drawn from the exposition above and some forecasts will also be attempted. First, there are no doubts that transnational commercial law has made a great progress in the last century. This great progress is evident in the number of global conventions which have been held, as well as in regional agreements. The truly international willingness and the need of new transnational commercial law can accommodate the surge in international trade at that stage, both have contributed in developing transnational commercial law in the 21th century. Second, it could be observed from this dramatic transition in the 20th century that 'national pride' did not hold as much weight as today. The sensitivity of globalization was not a hinder to embrace internationally devised law.23 On the contrary, in this century many countries tend to be averse to embrace none national commercial law because of their desire to preserve their 'national identities'.24 Third, it would appear that the approaches to achieve a complete global commercial law in this century are sterile. The cultural and political hurdles are still very hard to jump. Moreover, the compromise process to achieve such global law may involve many demerits. Fourth, it could be argued that the near global conventions might be the optimal alternative of global law, owing to the discernable capability of global conventions in raising the balance in favour of economic interests compared with or against maintaining the national identity. ...read more.