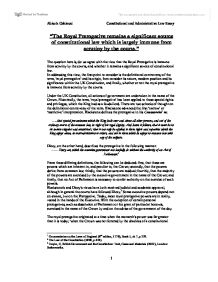 &quot;The Royal Prerogative remains a significant source of constitutional law which is largely immune from scrutiny by the courts.&quot;

of the Act had not replaced the prerogative power of the SoS to maintain law and order. In some statutes, the prerogative power is expressly preserved, for example, the Immigration Act 1971, s33 (5).12 The prerogative is divided into that which is exercised by ministers (in the name of the Crown), the 'political prerogative' and that which is personal to the monarch, 'personal prerogative'. While regal powers are exercised in the name of the Crown by the government of the day, the Crown nevertheless retains important residual power. Of these, the dissolution of Parliament and the appointment of Prime Minister are the most significant. 'There still remains the prerogative notion that the Crown never dies and can do no wrong'13, thus placing the Queen outside the jurisdiction of the courts and guaranteeing immunity from prosecution in her own courts. The political prerogative is usually sub-classified into Executive, Judicial and Legislative prerogatives. The Executive prerogative relates to international and national affairs, covering matters such as: disposition of the armed forces, conduct of the realm in time war and emergency, declaring war and peace, issuing passports, making treaties and the general conduct of external relations, including recognising foreign states and the consequential privileges and immunities flowing therefrom.14 The Judicial prerogative include that of mercy (power to issue pardon for offences) ...read more.