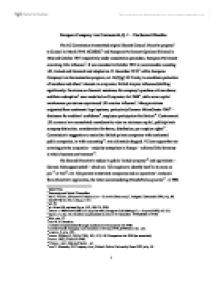 Brady53. A 1992 amending Directive54 has extended articles 18-2455 to companies under control of parent public company entitled to appoint/dismiss board majority or having sole majority voting rights control in them56; implemented in s. 258 CA 1985. This provision has, as intended, prevented target companies' subsidiaries acquiring shares outside 10% limit57. Addressing capital increase, art. 25(1) states that shareholders decide this in general meeting under nationally-prescribed procedure58 - class shareholders vote separately - which must be published (CA 1985, s. 80; AktG 1965, arts. 182(1), 183). Capital increase authorised in company instruments or general meeting decision does not need general meeting approval, as in France and Germany59 (art. 25(2)). Derogation from general meeting is allowed for employee participation, but public interest in crisis situation does not warrantee derogation60. Consideration for shares rules (arts. 26, 27) are same as for formation. Mandatory pre-emption rights (art. 29), familiar to different legal systems, were principally influenced by AktG 1965, arts. 186-761. Newly issued shares' offer must be published in writing or in Gazette62. Derogation is only for employee participation. In UK, the unfamiliar pre-emption was implemented in s. 89 CA 1985. Pre-emptive rights cannot be restricted or withdrawn by company instruments63, only by 2/3 majority in general meeting64; Germany requires 75% majority vote, necessity and benefits to outweigh losses65. In capital reduction, general meeting must approve decision - art. 30 - by 2/3 majority or simple majority where half the capital is represented66. ...read more.