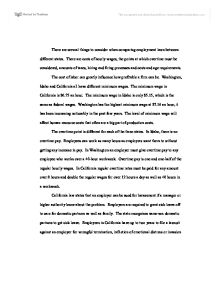 There are several things to consider when comparing employment laws between different states. There are costs of hourly wages, the points at which overtime must be considered, amounts of taxes, hiring and firing processes and costs and age requirements.

There are several things to consider when comparing employment laws between different states. There are costs of hourly wages, the points at which overtime must be considered, amounts of taxes, hiring and firing processes and costs and age requirements. The cost of labor can greatly influence how profitable a firm can be. Washington, Idaho and California all have different minimum wages. The minimum wage in California is $6.75 an hour. The minimum wage in Idaho is only $5.15, which is the same as federal wages. Washington has the highest minimum wage at $7.16 an hour; it has been increasing noticeably in the past few years. The level of minimum wage will affect human resource costs that often are a big part of production costs. ...read more.

California law states that an employer can be sued for harassment if a manager or higher authority knew about the problem. Employers are required to grant sick leave off to care for domestic partners as well as family. The state recognizes same-sex domestic partners to get sick leave. Employees in California have up to two years to file a lawsuit against an employer for wrongful termination, infliction of emotional distress or invasion of privacy. This was passed in 2003 and will cost California employers more to defend and settle employment litigations. Supervisors in Washington can also be held liable for discrimination and harassment done by those employees working under them. ...read more.

In some states this is a few months where as others it is a year or longer. The hiring process for all three states has several laws preventing discrimination in age, race, gender and basically everything else. Everyone should have a fair chance at getting a job. I would move my business to Idaho where labor costs are going to be cheap. Washington and California have heavy laws on break times while working and keeping track of overtime worked. Idaho seems to be the cheapest place to run a business under all the laws to protect employees. Minimum Wage Laws in the States. 1 Jan. 2004. U.S. Department of Labor. 8 Mar. 2004 <http://www.dol.gov/esa/minwage/america.htm#2> Coby, Christopher E. More Time for Filing Employment Claims Permitted by the Legislature. Sept. 2002. < http://www.littler.com/nwsltr/asap_filingtime.html> ...read more.