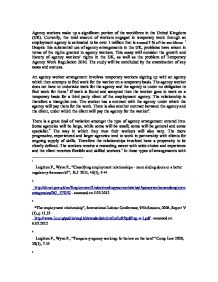 This essay will consider the growth and history of agency workers rights in the UK, as well as the problem of Temporary Agency Work Regulation 2010. The study will be concluded by the examination of key cases and statutes.

Agency workers make up a significant portion of the workforce in the United Kingdom (UK). Currently, the total amount of workers engaged in temporary work through an employment agency is estimated to be over 1 million that is around 3 % of the workforce. 1 Despite this substantial use of agency arrangements in the UK, problems have arisen in terms of the rights granted to agency workers. This essay will consider the growth and history of agency workers' rights in the UK, as well as the problem of Temporary Agency Work Regulation 2010. The study will be concluded by the examination of key cases and statutes. An agency worker arrangement involves temporary workers signing up with an agency which then attempts to find work for the worker on a temporary basis. The agency worker does not have to undertake work for the agency and the agency is under no obligation to find work for them.2 If work is found and accepted then the worker goes to work on a temporary basis for a third party client of the employment agency. The relationship is therefore a triangular one. The worker has a contract with the agency under which the agency will pay them for the work. There is also another contract between the agency and the client, under which the client will pay the agency for the worker3. There is a great deal of variation amongst the type of agency arrangement entered into. Some agencies will be large, while some will be small; some will be general and some specialist.4 The way in which they treat their workers will also vary. The more progressive, experienced and larger agencies tend to work in partnership with clients for ongoing supply of skills. Therefore the relationships involved have a propensity to be clearly defined. The workers receive a rewarding career with wide choice and experience and the client receives flexible and skilled workers.5 In these types of arrangements with progressive agencies it is common for the worker to be explicitly employed by the agency and the worker is therefore entitled to take the benefit of employment rights. ...read more.

However, the legal position was that there was no contractual nexus and the worker could therefore not be the employee of the client. Perhaps in order to remedy the perceived injustices resulting from a lack of full legislative protection for agency workers, the courts then went into a period of deciding cases more in favour of the worker. In Franks v Reuters Ltd14 the EAT originally found that an agency worker who had been supplied to the respondent client organisation for five years could not claim for unfair dismissal or redundancy pay on the basis that there was no employment relationship between the client and the worker. It was found that there was a lack of mutuality of obligations both on the part of the agency and the worker, and the client and the worker. However, on appeal to the Court of Appeal it was held that the EAT should not have ruled out the existence of an employment relationship between the worker and the client. The Court of Appeal stated that the complexity of working relationships requires employment tribunals to consider all the circumstances before determining status. In particular, the Court of Appeal noted the possibility of finding an implied contract being formed between the worker and the client by virtue of their dealings over the lengthy period. The court went so far to say that: "dealings between parties over a period of years, as distinct from the weeks or months typical of temporary or casual work, are capable of generating an implied contractual relationship."15 Similarly, in Dacas v Brook Street Bureau (UK) Ltd16 the Court of Appeal was again asked to consider whether an employment relationship could be formed between an agency worker and the client organisation. In this case the worker was supplied by the agency to be a Council care worker and she worked in that role for the one client for a period of four years. ...read more.

the pay received in the previous month.24 The equal treatment includes: conditions as to the duration of working time, overtime, breaks, rest periods, night work, holidays, pay, and maternity issues.25 Thus, agency workers are finally entitled to a greater range of rights than they have previously been, and therefore have the benefit of additional protection against exploitation through agency arrangements. However, they are still not entitled to rights of unfair dismissal and redundancy pay. This to some extent reflects the difficult balance which must be achieved between the needs of business in terms of flexibility, and the desirability of protection for workers. However, some are critical of the new Regulations on the basis that it will be costly to businesses in an economically difficult time.26 In conclusion, the rights of agency workers have traditionally been much less protective than the rights afforded to employees, and this has left agency workers vulnerable and subject to potential abuse. As legislative provisions have not afforded adequate protection to agency workers, the courts have taken it upon themselves to attempt to use legal principles to turn agency workers into employees in order to give them access to greater rights. However, the courts have now realised that the legal principles relied upon cannot give rise to an employment relationship in the standard circumstances of the agency agreement. However, developments at an EU level now mean that agency workers are benefiting from equal treatment as compared to employees, although they will not benefit from full employment rights such as those to claims for unfair dismissal and redundancy pay. Consequently the new Regulation on temporary agency workers did not solve the problems that judges where dealing with before. For the reason that there are no special provisions in legislation that would define temporary agency workers, the question in terms of rights such a worker would fall into normal principles. That means it would be the case of recognising the technical employee and whether the qualifying period of 12 weeks was satisfied. ...read more.