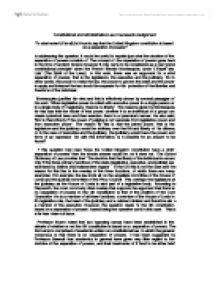 To what extent (if at all) is it true to say that the United Kingdom constitution is based on a separation of powers?

Constitutional and Administrative Law Coursework Assignment To what extent (if at all) is it true to say that the United Kingdom constitution is based on a separation of powers? In addressing this question, it would be useful to explain just what the doctrine of the separation of powers consists of. The concept of the separation of powers goes back to the time of ancient Greece however it only came to be considered as a real 'grand constitutional principle' when the French theorist Montesquieu wrote 'L'Esprit des Lois' (The Spirit of the Laws). In this work, there was an argument for a strict separation of powers, that is the legislature, the executive and the judiciary. So in other words, the power to make the law, the power to govern the state and the power to apply and interpret the law should be separate for the protection of the liberties and freedoms of the individual. Montesquieu justifies his view and this is effectively shown by several passages of his work. 'When legislative power is united with executive power in a single person or in a single body of magistracy, there is no liberty'. The reasons given by Montesquieu for this was that the holder of that power, whether it is an individual or a group can create tyrannical laws and then exercise them in a tyrannical manner. ...read more.

The head of the judiciary, the Lord Chancellor also is a member of all three branches of government since he is in the Cabinet, Lords and heads the judicial system.' This is a useful summary of the argument against the idea. The opposing camp in this debate consists mainly of the judiciary. They argue that the UK constitution is based on a separation of powers. Numerous senior judges have expressed this opinion, one of which being Lord Diplock in Duport Steels Ltd v Sirs (1980). He stated, '... at a time when more and more cases involving the application of legislation which gives effect to policies that are the subject of bitter public and parliamentary controversy, it cannot be too strongly emphasized the British Constitution, though largely unwritten, is firmly based on the separation of powers. Parliament makes the laws, the judiciary interpret them'. This is a very important point and is linked in with the idea of Judicial Independence. The judiciary itself has several safeguards which protect itself role of impartiality and help to ensure a fair and unbiased dispensing of justice. For example, judges have the security of tenure, which means they will stay in office, on the condition of 'good behaviour' and can only be removed if they receive a criminal conviction or under the mandatory resignation rule, which requires judges of the age of 70 to retire, unless it is decided that it is in the public interest for the judge to continue working until the age of 75. ...read more.

Good, sustained argument. In order to improve this essay, the student should focus on case law, and use the arguments developed there as a frame for his/her response.

Reference should be made to questions raised over whether we have separation of powers, versus evidence of separation - absence of bias (e.g. Dimes), the fact Lords of Appeal in Ordinary rarely speak or vote except on legal matters etc.