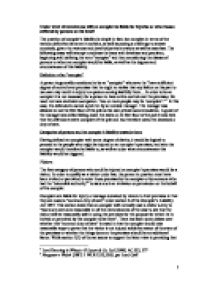 Under what circumstances will an occupier be liable for injuries or other losses suffered by persons on his land?

Under what circumstances will an occupier be liable for injuries or other losses suffered by persons on his land? The question of occupier's liability is simple in fact, but complex in terms of the various definitive elements it contains, as well as posing a challenge to answer concisely, given the vastness and detail of pertinent statute as well as case-law. The following essay will attempt to address the issue with briefness and precision, beginning with defining the term "occupier" and then considering the classes of persons to whom an occupier would be liable, as well as the degrees and circumstances of this liability. Definition of an "occupier" A person is generally considered to be an "occupier" whenever he "has a sufficient degree of control over premises that he ought to realize that any failure on his part to use care may result in injury to a person coming lawfully there... In order to be an occupier it is not necessary for a person to have entire control over the premises. ...read more.

There has been some debate over whether this "common duty of care" is owed in that the occupier should take reasonable steps to prove that the visitor is not injured solely by reason of the state of the premises or whether the things done on the premises should be an additional factor. While section 1(1) of the act seems to support the latter view in providing that the 1957 Act will "regulate the duty which an occupier of premises owes to his visitors in respect of dangers due to the state of the premises or to things done or omitted to be done on them". However, this phrase was re-interpreted by the Court of Appeal in Fairchild v Glenhaven Funeral Services Ltd3, which ruled that the former interpretation was correct. There are, however, some circumstances in which the concept of "the common duty of care" is not applied, two in particular - 1) Exclusion of duty: Under section 2(1) of the Act, an occupier is free to "restrict, modify or exclude this duty to a visitor by agreement or otherwise". ...read more.

Neighbours: An occupier of premises is expected to take reasonable steps to eliminate the threat of danger posed by a dangerous situation arising on his land that could potentially endanger his neighbour's land, as in the case of Goldman v Hargrave5 lightnight struck on the defendant's land set fire to it, and the defendant did not do enough to prevent the fire from spreading to his claimant neighbour's land. The claimant was successful in his claim and recovered damages for compensation. There is, however, some debate as to whether an occupier owes his neighbour a duty of care to prevent his land from becoming a source of danger to the neighbour's land. This question was raised in Smith v Littlewoods6, where vandals broke into the defendant's abandoned land and a fire was started, spreading to the claimant's land. The House of Lords dismissed the case, stating that the fire was not a reasonably foreseeable consequence of the defendants having abandoned their land. 1 Lord Denning in Wheat v E Lacon & Co. Ltd [1996] AC 552, 577 2 Ferguson v Welsh [1987] 1 WLR 1553,1563, per Lord Goff 3 [2002] 1 WLR 1052 4 [1996] QB 567 5 [1967] AC 645 6 [1987] AC 241 ?? ?? ?? ?? 1 ...read more.