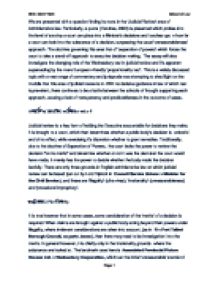 We are presented with a question finding its roots in the Judicial Review area of Administrative law. The essay will also investigate the changing role of the Wednesbury test in judicial review and its apparent superseding by the mo

We are presented with a question finding its roots in the 'Judicial Review' area of Administrative law. Particularly, a quote (Varuhas, 2009) is presented which probes into the level of scrutiny a court can place into a Minister's decisions and touches upon how far a court can look into the substance of a decision, surpassing the usual 'unreasonableness' approach. The doctrine governing this area that of 'separation of powers' which forces the court to take a stand-off approach to executive decision making. The essay will also investigate the changing role of the Wednesbury test in judicial review and it's apparent superseding by the more European-friendly 'proportionality test'. This is a widely discussed topic with a vast range of commentary and jurisprudence attempting to shed light on the muddle that this area of judicial review is in. With no decisive guidance in law of which test is prevalent, there continues to be a battle between the schools of thought supporting each approach, causing a lack of transparency and predictableness in the outcome of cases. What is Judicial Review? Judicial review is a key form of holding the Executive accountable for decisions they make. It is brought to a court, which then determines whether a public body's decision is unlawful and of no effect, while exercising it's discretion whether to grant remedies. ...read more.

In their article "Beyond Wednesbury: substantive principles of administrative law", in which they propose a review of the administrative system, Lester and Jowell (1987) opine that Wednesbury is "confusing and tautologous... It allows courts to interfere with decisions that are unreasonable, and then defines an unreasonable decision as one which no reasonable authority would take". Thus, this rejects even the compromise of a bifurcation, as the Wednesbury test would be left unreformed, with all these criticisms in tow. In their book 'Administrative Law', Wade and Forsyth (2004, pp.371-372) discuss the inevitable 'coup de grace' that looms over the Wednesbury approach, though has not yet fallen "despite calls for it from very high authorities". Of course with such high pressure here it is obvious why the area is seen to be in a 'muddle', with some cases, (such as the Indian case of State of Madhya Pradesh and Others v. Hazarilal) stating that "Wednesbury principle of unreasonableness has been replaced by the doctrine of proportionality", though this of course is a large overstatement of our law at present. In his paper "The Rise and Ruin of Unreasonableness", Andrew Le Sueur (2004) is quick to speculate how the Wednesbury approach has survived this long. He says "we have heaped too much on the reasonableness test... ...read more.

That said, caution is required here, as with proportionality, by it's very nature involving the courts prescribing alternatives to the decision made could very easily cause a descent into a 'merits review'-esque approach, which is contrary to the separation of powers doctrine. An interesting point is put forward in Rivers' (2006) article 'Proportionality and variable intensity of review' that, knowing that the judicial role is to secure legality rather than correctness, in order to avoid deference, it is better to state that your are testing for 'unproportionality' rather than prescribing what would be a proportional remedy. Conclusion Though we came to the conclusion that a bifurcatory approach seems to have the most merits, with the obvious bonus of certainty, the problem of exponential discretion is avoided by limiting the proportionality test to rights-based cases, allowing a balance of collective and private interests. Looking now at a quote from Leyland and Anthony's (2008) 'Textbook on Administrative Law' stating that proportionality, '"in contrast to irrationality is often understood to bring courts much closer to reviewing the merits of a decision". This shows that merits are only looked at to a certain extent without breaching the separation of powers doctrine. Should there be a call for a complete fresh start, a completely inalienable and moral proportionality test needs to be developed, or there will always be call for the traditional Wednesbury test. ...read more.