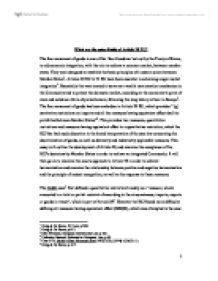 What are the outer limits of Article 28 EU?

What are the outer limits of Article 28 EU? The free movement of goods is one of the 'four freedoms' set out by the Treaty of Rome, to aid economic integration, with the aim to achieve a common market, between member states. They were designed to establish the basic principles of a custom union between Member States1. Articles 28 EU to 31 EU have been essential in achieving single market integration2. Essentially this was created to serve as a wealth maximization mechanism in the Community and to protect the domestic market, according to the economist's point of view and acted as a form of protectionism, following the long history of war in Europe3. The free movement of goods has been embodies in Article 28 EU, which provides " [q] uantitative restrictions on imports and all the measures having equivalent effect shall be prohibited between Member States"4. This provides two measures, quantitative restrictions and measures having equivalent effect to a quantitative restriction, which the ECJ has had much discretion in the broad interpretation of the case law concerning the discrimination of goods, as well as distinctly and indistinctly applicable measures. This essay will outline the development of Article 28, and examine the acceptance of the ECJ's decisions by Member States in order to achieve an integrated Community. It will then go on to examine the courts approach to Article 30 in order to achieve harmonization and examine the relationship between positive and negative harmonization and the principle of mutual recognition, as well as the response to these measures. ...read more.

Furthermore, this also applies to national rules that give preference to domestic products such as in Commission v Ireland (Irish pipes)29, where the restriction to supply Irish manufacturers alone was found to be a breach of Article 28. Indistinctly applicable measures concern those measures that are obviously discriminatory, they are those rules and practices, which in law apply to both national products but in fact, have a particular burden on the imported goods. This was seen in the case of Rau30, where the court found that the Belgian law of requiring margarine to be particularly packaged so that it would not be confused with butter, to be an indistinctly applicable measure, because imported margarine had to be repackaged before it could be sold in Belgium, which was impractical and a breach of Article 2831. Similarly in Mars32, the requirement that the bars would have to be repackaged to be sold in Germany would mean that they would incur more costs of advertising and repackaging, therefore constituted a breach of Article 28. This case shows that the court wanted the companies to have a "Europe-wide marketing strategy"33, which was done to achieve a single market in the EU and to create a sense of community, as well as to avoid unnecessary financial burdens, especially if the costs would be passed to the consumer34. Where ingredients in products are concerned, such as in Deserbais35, it can also amount to an indistinctly applicable measure, because the French rule that the 'Edam' cheese should contain only 40% fat was found to be a breach of Article 28. ...read more.

It refined the application of Dasonville, but in Keck, the ECJ clarified rules relating to selling arrangements. The Keck formula has been heavily criticized. Although the cases so far have fitted into the formula well, and is recognized for the fact that they do not discriminate in law or in fact, however it restricts the advertisement for those products meant for the mass market62. It does not recognize that advertisement and marketing of products go hand in hand, which Advocate General Jacob's pointed out as well, because it limited the economic activity in the Community63. The ECJ has some choice in its interpretation of Article 28, as a result of its development through history, stemming from the Dasonville formula and has always been particularly harsh on discriminatory rules concerning imports and exports. Dasonville was the first step to creating an internal market. Article 28 had limited the discriminatory and protectionist measures that were previously evident in the Community and has extended Article 28 to cover indistinctly applicable rules, shown in Cassis. Cassis helped achieve a single market and achieve a sense of harmonization that could be justified by mandatory requirements, which is wider than Article 30, which can be assed with the principle of proportionality. Only Article 30 could save any measures, as long as they were discriminatory and within a certain category. Before Keck the court had "lost sight of the link between Article 30 (28) and internal market building"64, therefore in Keck, the Court felt that it was time to reexamine the outer limits of Article 28. Although it has been criticized for being over formalistic, it was able to focus on market access, but still left room for maneuver if changes are required later on. ...read more.