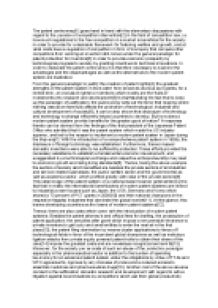 ﻿The patent controversy[1] goes hand in hand with the elementary discussions with regard to the paradox of competition intervention[2] in the field of competition law, i.e. how much regulations to the free competition in a market is beneficial for the society in order to provide for a desirable framework for fostering welfare and growth, and at what costs does a regulation of competition in form of monopoly that compels other competitors from working an invention still comes under the general paradigm for patent protection for inventors[3] in order to provide economic prosperity by technological progress to society by granting incentives to technical innovations. In order to elaborate the patent controversy it is therefore necessary to examine the advantages and the disadvantages as well as the alternatives to the modern patent system are illustrated. From the general paradigm to justify the creation of patent rights[4], the greatest strengths of the patent system in its modern form becomes obvious as it grants, for a limited term, an exclusive rights to inventions which mostly are the fruits of investments into research and development[5] Notwithstanding the fact that to keep up this paradigm of justification, the public policy sets out the tenor that reaping where nothing was sown harmfully affects the promotion of technological, industrial and cultural development of society[6], it can be also shown that disclosure of technology and technology exchange efficiently helped countries to develop. ...read more.

Moreover, for the society per se costs of such an abuse of the protection paradigm especially in the pharmaceutical sector is addition to the burden of spending tax-money for an advanced patent system under the obligations by virtue of FTAs and WTO agreements, rigorous by any increase of prices and a reduced access to essential medicines and pharmaceutical drugs[16]. Another cost of the above abusive conduct is the suffocation domestic research and development with regard to active litigation against local industries by competitors which use their global productivity enhancing investments and built up of asset value, to locally flooding the product landscape with protection rights force down competition[17]. In Conclusion, in order to limit the costs general compulsory licensing was anticipated to be the simplest and most expedient reform of patent systems. Although compulsory licensing is embraced in all modern patent law, it turned out to be inefficient due to the high requirements to impose such compulsory licensing in accordance with the TRIPS framework with regard to the argument that those compulsory licensing will ultimately reduce the stimulus to invent, and thus to innovate, which finally harms the development by technical inventions[18]. The handling of this matter in India[19] and Brazil[20] shows an efficient alternative way to hoist the patent system with its? own petard by compelling high-level requirements to patentability of pharmaceuticals and other goods. Any other alternative in governing inventions, i.e. the Russian certification etc. ...read more.