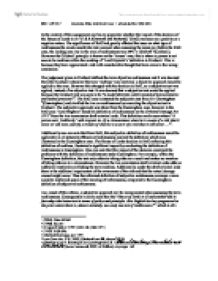 What was the impact of the decision of R v G and R?

In the context of this assignment one has to appreciate whether the impact of the decision of the House of Lords in R v G & R (Gemmell and Richards) 1(RvG) was seen as a positive or a negative nature. The significance of RvG had greatly affected the issue on what type of recklessness the courts would take into account when assessing the mens rea. Before the RvG case, the leading case law in the area of recklessness was MPC v Caldwell 2(Caldwell). However the Caldwell principle is known as the 'lacuna' case, this is where a person is not seen to be reckless within the wording of 'Lord Diplock's' definition in Caldwell. This is because they have appreciated a risk with considerable thought but have come to the wrong conclusion. The judgement given in Caldwell defined the term objective recklessness and it was deemed that after Caldwell whenever the term 'reckless' was involved, a objective approach would be applied to the case. However this changed with the decision in RvG, as a subjective test was applied, instead of an objective test. It was deemed that a subjective test would be applied because the Caldwell test was seen to be "a model direction which contained inconsistencies and lacked precision"3. ...read more.

This case highlighted the negative aspects of objective recklessness as the person in question was fourteen years of age with learning difficulties. Evidently the risk must be obvious to the reasonably prudent person, and not necessarily obvious to the defendant. Therefore this conveys the problems within the Caldwell test as it does not cover everything, including individual characteristics. In this case the fourteen year old girl was guilty of criminal damage as she failed to consider the risk which would have been obvious to a reasonable person. Subsequently this issue was raised in RvG, where within the trial, 'Lord Diplock's' direction in Caldwell was used and disagreement occurred as the issue of the reasonable adult was accepted in being aimed at the children of ages eleven and twelve. From this trial, the case went onto the House of Lords, which unanimously answered the conflict of this question. The impact of the House of Lords decision in RvG illustrated great criticisms on the Caldwell test, in where it was noted that the Caldwell case was "based on fragile foundations because the law commission report was not referred to"9 and subsequently was referred to in RvG. Additionally this impact of criticism upon Caldwell was heavily enforced by other law lords, for instance, 'Lord Hutton' illustrated his criticism nature by expressing "Experience suggest that in Caldwell in law took a wrong turn"10 and agreeing with 'Lord Bingham'. ...read more.

Therefore this has allowed the courts to scrutinize the expression reckless more easily than seen in cases before RvG. An illustration of this can be seen in Eliot v C as noted above. In addition one can note that RvG case has ruled out a clear distinction between negligence and recklessness. It can be illustrated by previous cases that before the decision in RvG, there was not a clear distinction between both concepts. An example of a case is Chief Constable of Avon v Shimmen16. Within this case, it was deemed that a person who stops to think will still be liable if he realised there was some risk. Therefore this case illustrates that the Caldwell test made individuals guilty who previously were not guilty due to them being careless, but now after RvG are reckless. Overall, one must appreciate the House of Lords decision in RvG, which has allowed a subjective test to be reasserted when referring to recklessness and introduced a reformed definition of subjective recklessness. Additionally the decision has allowed a clear distinction to be applied when assessing negligence and recklessness cases. Moreover, the Caldwell test has been overruled in relation to criminal damage. Furthermore it can be identified above that there are both positive and negative impacts which have departed from the RvG decision in the House of Lords. ...read more.