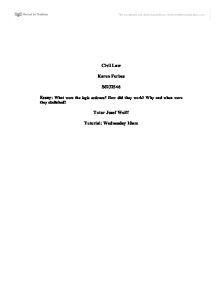 What were the legis actiones? How did they work? Why and when were they abolished?

Following this the plaintiff laid down a wager (sacramentum), dependant on the level of importance of the property to him as did the defendant. The party who eventually lost the claim forfeited the money to the public purse, the idea being that this would prevent frivolous actions.10 The magistrate would then give interim possession to one of the parties, who had to lay down security for the property in the event of them losing the claim. If the action was in personam the parties made their claims and laid down similar wagers, although there was no physical property to hand over. At this point parties taking part in both in rem and in personam actions were left for thirty days in the hope that they would resolve the action themselves. After the thirty days had passed they appeared before the magistrate and a iduex was decided upon. It appears that while the parties did not necessarily choose their judge they could prevent someone they did not want.11 The second procedure is that of iudias postulatio which was available for claims of stipulatio (a form of contract) and property and inheritance disputes. This procedure was more convienient and the plaintiff could often choose between it and sacramentum. ...read more.

The system declined in popularity as Rome developed from a small city-state to the centre of an Empire. This resulted in the law developing and becoming more complex at the same time as the population was increasing and becoming more diversified. The legis acitones were only relevant to Roman citizens, this led to a separate formulary system being created by the peregrine praetor. The formulae system was less formal and applied to non-Roman citizens and eventually the Roman people demanded that the formulae system be introduced for them. The lex Aebutia formally recognised the formula system and Augustus abolished the legis actiones. While there had been improvements made to the legis actiones system, the increasing size and diversity of Rome made the system unworkable. In conclusion, it appears that the legis actiones were the set procedures through which civil litigation progressed. They in general were very formal and often required statements to be made formally in the required language in front of the magistrate. According to Gaius they included procedure for the summons, the trial and the execution of the civil litigation procedure of Rome and were applied from the time of the Twelve Tables to around 200 BC. They were abolished by Augustus formally during the principate but were effectively abolished by the Lex Aebutia which recognised the formula system for civil litigation. ...read more.

This student written piece of work is one of many that can be found in our University Degree Roman Law section.