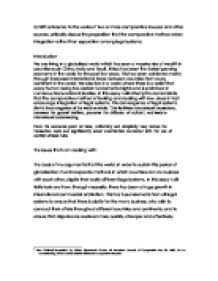 With reference to the works of two or more comparative lawyers and other sources, critically discuss the proposition that the comparative method drives integration rather than separation among legal systems:

Q With reference to the works of two or more comparative lawyers and other sources, critically discuss the proposition that the comparative method drives integration rather than separation among legal systems: Introduction We are living in a globalised world which has seen a massive rise of wealth in countries such China, India and Brazil. Africa has been the fastest growing economy in the world for the past few years. This has been achieved mainly through increased international trade between countries from every continent in the world. We also live in a world where there is a belief that every human being has certain fundamental rights and is enshrined in numerous trans-national treaties. In this essay I will attempt to demonstrate that the comparative method of looking and dealing with law, does in fact encourage integration of legal systems. This convergence of legal systems stems from integration of the world as whole. This facilitates international transactions, increases the general welfare, promotes the diffusion of culture1, and leads to international understanding. From the economic point of view, uniformity and simplicity may reduce the transaction costs and significantly avoid uncertainties connected with the use of conflict of laws rules. The Issues that I am dealing with: The basis of my argument is that the world, in order to sustain this period of globalisation must incorporate methods in which countries can do business with each other, dispite their vastly different legal systems. In this essay I will firstly look and how, through necessity, there has been a huge growth in international commercial arbitration. ...read more.

In arbitration proceedings, the purpose of the proceeding is more a question of 'finding the truth' than 'settlement of the dispute'. It is important to remember that international arbitration agreements frequently provide for prior compulsory mediation. If the parties are unable to compose their differences with the assistance of a neutral mediator, then the purpose of arbitration is not to try to bring them together but to decide who should prevail and to what extent. The parties to arbitration will more likely accept the arbitrator as an impartial person to decide who should prevail if the arbitrator does not interfere actively in the proceedings and behaves in a somewhat reserved manner, as common law judges typically do. Finally, the purpose of 'finding the truth' as opposed to 'settlement of the dispute' is also important, because the arbitrator's decision cannot be corrected as easily as in court proceedings, where often an appeal is possible and the decision at first instance can be controlled by a higher court. Of course a civil law arbitrator will apply common law principles only if this is more effective to him and he will follow civil law rules for the rest. Thus the area of international commercial arbitration is not merely a place of clash and confrontation between common law and civil law but actually also a real point of intersection where common law and civil law are fused together to a certain degree. How the creation of the EU has integrated legal systems: The creation of European Union (EU) ...read more.

Volume 29 page 43, Dennis Campbell 6 See 'Some reflections on Teubnerian and Kelsenian Legal theory'- Conflict of laws (2007); for an excellent academic critique of the legal theory behind the choice process in ICA. 7 See 'A common layer's view of his civilian colleagues' 57 Loisiana Law Review 227 (1996); for a firsthand account of the process of drafting these agreements and examples of the comparative method in action. 8 See Comparative law of international arbitration by Jean-Fran�ois Poudret, S�bastien Besson 9 W Van Gerven "ECJ Case-Law as a Means of Unification of Private Law" (1997) 2 European Review of Private Law 293. 10 A Common law for Europe by Gian Antonio Benacchio, Barbara Pasa 11 For example, Resolution on Action to Bring into line the Private Law of the Member States, 1989 O.J. C158/400, and Resolution on the Harmonization of Certain Sectors of the Private Law of the Member States, 1994 O.J. C205/518. 12 See O Lando & H Beale (eds) Principles of European Contract Law (Kluwer, The Hague, 2000). 13 "rules of law which in principle have no legally binding force but which nevertheless may have practical effects" as defined in 'Soft Law' ELR 14 14 The State of the European Union: Law, Politics, and Society Vol. 6 (2003) p221 15 Zweigert K, Koetz H, supra note 40 at 261 16 See EC Competition Law Essay By Veronica Hagenfeldt 17 Nippon Yusen Kasha v. Karageorgis 1 W.L.R. 1093 at 1095-1095. 18 See Perspectives for the unification and harmonisation of family law in Europe By Katharina Boele-Woelk ?? ?? ?? ?? ...read more.