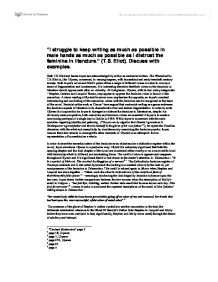 "I struggle to keep writing as much as possible in male hands as much as possible as I distrust the feminine in literature." (T.S. Eliot). Discuss with examples. Both T.S Eliot and James Joyce are acknowledged by critics as modernist writers. The Wasteland by T.S Eliot is, like Ulysses, concerned, to varying degrees, with humankind and early twentieth century society. Both Joyce's novel and Eliot's poem utilise a range of different voices in order to convey a sense of fragmentation and incoherence. It is interesting therefore that their views on the feminine in literature should oppose each other so violently. At first glance, Ulysses, with its two male protagonists - Stephen Dedalus and Leopold Bloom, may appear to oppress the feminine voice in favour of the masculine. A closer reading of the text however soon emphasises the opposite, as Joyce's constant interweaving and conflicting of the masculine voices with the feminine can be recognised as the basis of the novel. Feminist critics such as Cixous1 have argued that modernist writing as a genre embraces the feminine aspects of literature in its characteristic flow and textual fragmentation. In order to write Ulysses it is impossible for Joyce to disregard or distrust the feminine in literature as, despite his obviously male perspective, both masculine ...read more.

Neither Leopold Bloom nor Stephen Dedalus can exist as characters without their corresponding feminine influences. The same is true of Molly and Mrs Dedalus, and so Joyce emphasises the essential symbiotic nature of the voices in his novel, once with the pairing of Stephen and his mother and Leopold and Molly, and secondly with the parallels and conflicts between these two significant female characters. Sexuality, and lack of s*x are major themes running through Ulysses and it is important to examine them as they are the bonds which tie together masculine and feminine voices within the text, but also significantly, create conflict and tension throughout the novel. In Nausicaa, Joyce parodies the feminine register and the masculine persona in the forms of Gerty MacDowell, who is sitting on the beach, and Leopold Bloom, who is watching her. Joyce at once parodies and celebrates in a somewhat negative way, the different perceptions the two characters have of the situation. Gerty perceives Leopold in a strange, artificial and extremely romanticised manner, clearly influenced by the trashy novels she reads: "...she knew he could be trusted to the death, steadfast, a sterling man, a man of inflexible honour to his fingertips...That was their secret, only theirs, alone in the hiding twilight and there was none to ...read more.

Ulysses does not appear to the reader as one coherent voice, indeed, Joyce refuses to allow any one voice or personality to dominate the novel - characters and voices co-exist, complementing and conflicting with each other within the text - "I am another now and yet the same. A servant too. A server of a servant"15. The incoherence and the imperfect combination of characters, language and voices allows Joyce to create a work of art which truly represents mankind's subconscious voice. The different voices in Ulysses always retain their individual registers and nuances and Joyce constantly constructs and deconstructs relationships between the voices, ironically and at other times sincerely undermining both the feminine and the masculine registers. Ulysses is a democratic novel in this sense, as each voice is given equal importance, or lack of. While the novel may seem incoherent , or even as D.H. Lawrence wrote - "Nothing but old f**s and cabbage stumps of quotations from the Bible and the rest, stewed in the juice of deliberate, journalistic dirty-mindedness"16 it is undeniable that Joyce has created a novel which does not exclude or castigate, but includes and celebrates humanity in many different forms - "We walk through ourselves, meeting robbers, ghosts, giants, old men, young men, wives, widows, brothers-in-love. But always meeting ourselves. ...read more.