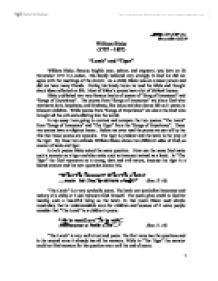 Natalya Shichkina December 2001 William Blake (1757 - 1827) "Lamb" and "Tiger" William Blake, famous English poet, painter, and engraver, was born on 28 November 1757 in London. His family believed very strongly in God but did not agree with the teachings of the church. As a child, Blake was an outcast person and did not have many friends. During his lonely hours he read the Bible and thought about ideas reflected on life. Most of Blake's poems have a lot of biblical themes. Blake published two very famous books of poems of "Song of Innocence" and "Songs of Experience". The poems from "Songs of Innocence" are about God who represents love, happiness, and kindness, like Jesus and also shows life as it seems to innocent children. While poems from "Songs of Experience" are about the God who brought all the evil and suffering into the world. In my essay I am going to contrast and compare the two poems: "The Lamb" from "Songs of Innocence" and "The Tiger" from the "Songs of Experience". ...read more.

Maybe Blake was trying to explain that the world is a very confused place, and no one can get any answers. The tone of the poem "The Tiger" seems to be in fear, with uses of words such as burning bright, fearful and terrors, placing an image in the reader's mind, trying to show us a fearless, independent animal - a monster that only lived to kill. Many people believed that tiger was created by ? force of evil. What is immediately obvious is the powerful rhythm of the poem and power of the words. Blake uses "A, A, B, B" rhyming pattern and it seems like a rapid beating of the heart (...bright ...night ...symmetry ...fire ...art ...heart). The using of fast beating rhythm could also mean to scare the reader. The poem was written in quatrain verses. In the poem the speaker was fearful and respectful describing the tiger; he was trying to represent to us the scared look of the animal, and let us to think how someone could create this monster. ...read more.

In both poems Blake wanted to show the reader that God could be powerful and meek as shown in "The Tiger" and "The Lamb". Blake is one of the people who saw visions and devoted his life to worship God with his poetry and art. Blake could see the world in symbols and to each of these symbols he gave meaning. In those two poems Blake shows that God create tiger, lamb and everything on the earth, he also shows that God has different personalities that He can be meek and innocent as a lamb or He can be fearless and strong as a tiger. I think William Blake is a very talented person who could express his feelings in the form of poems and engravings. Today, after more than two hundred years we can still enjoyed his works very much. I have never known or heard about William Blake before and while I was analysing the poems I learned more about him and his creative writing and can fairly say that Blake's poems and engraving will never leave person indifferent and will stay in his mind forever. ?? ?? ?? ?? 1 1 ...read more.