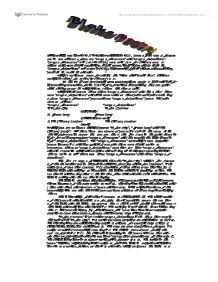 The whole overall mood of the poem is depressed, sad and uneasy. It contrasts with " songs of innocence" because this is the total opposite of it. You can tell Blake wanted them to be seen as a pair because they have the same title "Nurses song" and the same first sentence " when the voices are heard on the green" and they both involve a nurse and some children. In the poem the concerning lines for the reader are " whisperings in the dale" and "my face turns green and pale". The last two lines of verse one suggest that the nurse had a terrible childhood " the days of youth fresh in my mind, my face turns green and pale. In verse two the fears that are echoed about adulthood are "your spring and your day are washed away in play, and your winter and night are in disguise". The nurses warning in the last two lines is your future is hidden from you adulthood and times of suffering will soon come and the children are unaware of what will happen in the future. In this poem the spring represents times of development and of innocence. The winter the gaining of experience; adulthood times of suffering etc. When the nurse recites whisperings in the dale a dale is a deep valley and whisperings indicating they are hidden away, not playing out. ...read more.

Over two hundred years ago climbing boys were very common. The master sweep went round buying these poor four and a half year old boys for climbing up the chimney with. Skinny boys were the most useful the gaps were as little as one foot squared and some of the boys got stuck and died. These boys where very common and no-one complained about them because they put a lot of hard effort into the job and if the boys wanted to come back from down the chimney the master sweeper wouldn't let them; then they would shove pins or something sharp in their feet or light a fire so they couldn't come down. The only thing the climbing boys got to look forward to was dieing and joining God. It was the boys only hope but Blake did'nt like this and mooched the church in his poems because they did nothing about it. And did nothing to help the children. Most of the children died between the ages of two and three years of working in the chimneys. Their lungs would get damaged from the soot some of them even choked on it, it was that bad. The prices that the boys where being sold at is unbelievable as little as fifty pence could get you a climbing boy. But upon till the nineteen hundreds they were still being used but a lot of laws were passed to abolish it. ...read more.