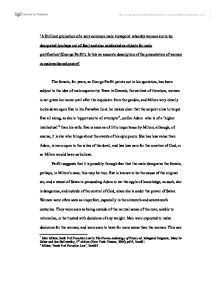 'A Brilliant projection of a very common male viewpoint whereby women are to be denigrated (perhaps out of fear) and also celebrated as objects for male gratification'(George Parfitt). Is this an accurate description of the presentation of women in male-a

'A Brilliant projection of a very common male viewpoint whereby women are to be denigrated (perhaps out of fear) and also celebrated as objects for male gratification'(George Parfitt). Is this an accurate description of the presentation of women in male-authored poetry? The female, for years, as George Parfitt points out in his quotation, has been subject to the idea of male superiority. Even in Genesis, the earliest of literature, woman is not given her name until after the expulsion from the garden, and Milton very clearly looks down upon Eve in his Paradise Lost: he makes clear that the serpent aims to target Eve all along, as she is 'opportune to all attempts'1, unlike Adam who is of a 'higher intellectual'2 than his wife. Eve is seen as of little importance by Milton, although, of course, it is she who brings about the events of his epic poem. She has less value than Adam, is more open to the wiles of the devil, and has less care for the creation of God, or so Milton would have us believe. Parfitt suggests that it is possibly through fear that the male denigrates the female, perhaps, in Milton's case, this may be true. Eve is known to be the cause of the original sin, and a vessel of Satan in persuading Adam to eat the apple of knowledge, as such, she is dangerous, and outside of the control of God, since she is under the power of Satan. Women were often seen as imperfect, especially in the sixteenth and seventeenth centuries. They were seen as being outside of the normal sense of the man, unable to rationalise, or be trusted with decisions of any weight. Men were expected to make decisions for the women, and were seen to have far more sense than the woman. This can be seen in Andrew Marvell's 'To his Coy Mistress'. ...read more.

Boase suggests that this suggestion of female authority could demonstrate a Freudian theory in that 'the poet 'deliberately chose a woman whom he had o right to possess because he was s******y inhibited by a mother fixation'31. Thomas Wyatt, too, seems to attribute great power to the woman: as previously mentioned, in his 'Whoso list to Hunt' he makes the assumption that the woman is, in fact, in control of him. The same sentiment is repeated in many of his sonnets, but in particular, in his 'They flee from Me', as the line 'She caught me in her arms long and small.'32, she appears to be the one in control of the situation. However, we must remember that Wyatt is writing at the court of Henry VIII, where women still had very little power. They were entirely subject to men, with a few notable examples- Elizabeth I, for example, never married, although she was still reliant on her male council for advice. 'Women, it was understood, were either married or to be married "and their desires are subject to their husband"'33. Perhaps it was not the woman that the man feared, but the men who controlled her. Thomas Wyatt was known to be an admirer of Anne Boleyn, indeed, 'Whoso List to Hunt' is generally accepted to be aimed at Anne Boleyn, and 'Caesar'34, Henry VIII, the King, the highest man in the country, and to be feared by every other man. 'Furthermore, the majority of critics agree that courtly love was the product of a court environment, especially in its initial stages, it was far from being a collective or a uniform doctrine'35 This suggests that it is not a realistic indicator of feelings towards women at the time, and that the power given to them in the poetry is, in fact, an illusion, and would not have been adhered to in life. ...read more.