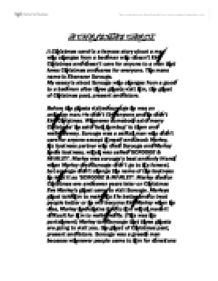 A Christmas Carol - My essay is about Scrooge who changes from a good to a bad man after three ghosts visit him, the ghost of Christmas past, present and future.

A CHRISMAS CAROL A Christmas carol is a famous story about a man who changes from a bad man who doesn't like Christmas and doesn't care for anyone to a man that loves Christmas and cares for everyone. The mans name is Ebenezer Scrooge. My essay is about Scrooge who changes from a good to a bad man after three ghosts visit him, the ghost of Christmas past, present and future. Before the ghosts visited scrooge he was an unhappy man. He didn't like anyone and he didn't like Christmas. Whenever somebody said 'merry Christmas' he said 'bah humbug' to them and walked away. Scrooge was a selfish man who didn't care for anyone except himself and Jacob Marley, his business partner who died. Scrooge and Marley had a business, which was called 'SCROOGE & MARLEY'. Marley was scrooge's best and only friend, when Marley died Scrooge didn't go to his funeral, but scrooge didn't change the name of the business he kept it as 'SCROOGE & MARLEY'. Marley died on Christmas eve and seven years later on Christmas Eve Marley's ghost came to visit Scrooge. Marleys ghost told him to make his life better and to treat people better or he will become like Marley when he dies, Marley had chains tied to him which made it difficult for him to walk and fly. ...read more.

They were having a conversation and his girlfriend said something but Scrooge wouldn't do what she wanted to do so she walked away. Scrooge was sitting on the bench looking at his girlfriend walk away. Scrooge then started saying 'go after her go after her' but he didn't. The ghost asked what happened, Scrooge told him and said 'I never saw her after that'. The ghost then said its time for me to leave. The next ghost will visit you. The ghost of Christmas present. Scrooge was back on his bed, and there was a light coming from the other room. Scrooge went in there and saw a man sitting on a chair surrounded by food. Scrooge said you must be the ghost of Christmas present. Yes said the ghost I ... lets just get this over and done with, touch my robe then said the ghost. Scrooge touched his robe and they were outside Bob Crachits house. The ghost went around sprinkling water over people, Scrooge asked what are you doing. I am giving these people my blessings. Where are we asked scrooge, we are outside Bob Crachits house. They went in and saw Crachits family all sitting there in a merry mood waiting for Bob Crachit to get home. ...read more.

Next the spirit shows Scrooge a dead body. The spirit did this to show Scrooge that the person dies in a horrible way. Scrooge reacts in a devastated way. Then the spirit shows Scrooge his grave stone with his name on it. When he sees his grave he reacts as a frightened man. He shouts to the spirit saying ' I am not the man I was' he says this because he doesn't want to be who he used to be. He wants to change into a good man. Scrooges grave opens and scrooge falls in. he lands on top of his dead body and starts shouting. Scrooge then wakes up and finds himself in bed. When scrooge wakes up he says 'I will live in the past, the present and the future! The spirits all three shall strive within me.' What he meant by this was that all the lessons the spirits have taught me would remain within me. The memories will remain with him to remind him who he is. Scrooge is now willing to change into a better man so he could live a better life I the present and future. I think the story gives a good message to everyone who doesn't like Christmas. It teaches them to treat other people well and not to be selfish. BY REHMAN AHMED 10 H ...read more.