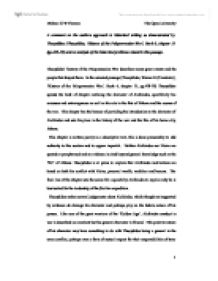 A comment on the authors approach to historical writing as demonstrated by Thucydides (Thucydides, 'History of the Peloponnesian War', Book 6, chapter 15 (pp.418-19) and an analysis of the historical problems raised in this passage.

A comment on the authors approach to historical writing as demonstrated by Thucydides (Thucydides, 'History of the Peloponnesian War', Book 6, chapter 15 (pp.418-19) and an analysis of the historical problems raised in this passage. Thucydides' history of the Peloponnesian War describes many great events and the people that shaped them. In the selected passage (Thucydides, Warner R (Translator), 'History of the Peloponnesian War', Book 6, chapter 15, pp.418-19) Thucydides spends the bulk of chapter outlining the character of Alcibiades, specifically his excesses and extravagances as well as his role in the fate of Athens and the course of the war. This chapter has the honour of providing the introduction to the character of Alcibiades and sets his place in the history of the war and the fate of his home city, Athens. This chapter is written purely as a descriptive text, this is done presumably to add authority to this section and to appear impartial. Neither Alcibiades nor Nicias are quoted or paraphrased and no evidence is cited beyond general knowledge such as the 'fall' of Athens. Thucydides is at pains to explain that Alcibiades motivations are based on both his conflict with Nicias, personal wealth, ambition and honour. ...read more.

Thucydides was a major supporter of Pericles and of Periclean Athens (Hornblower, S, 1996, 'The Oxford Classical Dictionary', Page 1519) and this might have tainted his views on Pericles and his supporters, Alcibiades being one of Pericles favourites (ibid., p1519). Further information on Thucydides relationship and attitudes towards Pericles, Socrates and Alcibiades would considerably help in understanding some of the comments he makes. Given that he was so enthused by Pericles it is strange that he is able to be so negative about Alcibiades, this may give us a hint as to Thucydides attempt to be as impartial and narrative as possible. To research this problem in more depth I would want to study several more contemporary texts with respect to Alcibiades, Pericles and Thucydides. After examination of another translation of Thucydides' history there were a few differences that might make work on either the original text or a different translation useful. The edition by Crawley (Crawley R, 1910, 'The History of the Peloponnesian War', Book VI, chapter XVIII, page 412) uses much harsher language in its description of Alcibiades. For example: ...publicly his conduct of the war was as good as could be desired, individually his habits gave offence to everyone, and caused them to commit affairs to other hands, and thus before long to ruin the city (Athens). ...read more.

As well as this he would have witnessed the defeat and humiliation of Athens in 404BC. According to the OCD (ibid., Page 1,517) this was the time when he performed much of his changes to the text. In the last decade of the fifth century what were the attitudes of Athenians to the memories of statesmen like Pericles and Alcibiades? These people were to be the first people to read Thucydides' history. Did Thucydides have to modify his history in 404BC (approximately) to adapt to modern attitudes of the war and its main historical figures, notably Pericles, Nicias and Alcibiades? During this time the infamous Thirty Tyrants were installed and though short lived (Thorley J, 1996, 'The Athenian Democracy', Page 76), they were responsible for the death of Alcibiades amongst many others and were considered as a (ibid., page 76) '...corrupt and vicious regime. Being such an ardent supporter of Pericles would Thucydides perhaps have sympathised with those such as Alcibiades during his final years and his eventual murder? In conclusion I would continue the study of these two issues by analysing further contemporary texts such as Xenophon, Plutarch and Plato whilst studying Thucydides style and approach to historical writing. Additional reading on Thucydides himself and his relationship towards the key figures in his history as well as his attitudes would be of great importance. ...read more.