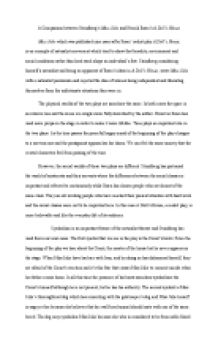 ﻿A Comparison between Strindberg?s Miss Julie and Henrik Ibsen?s A Doll?s House Miss Julie which was published nine years after Ibsen? realist play A Doll?s House, is an example of naturalist movement which tried to show that heredity, environment and social conditions rather than hard work shape an individual?s fate. Strindberg considering himself a naturalist and being an opponent of Ibsen?s ideas in A Doll?s House, wrote Miss Julie with a naturalist pessimism and rejected the idea of women being independent and liberating themselves from the unfortunate situations they were in. The physical worlds of the two plays are somehow the same. In both cases the space is an interior one and the scene is a single room fully described by the author. However Ibsen has used more props on the stage in order to make it more lifelike. Time plays an important role in the two plays. As the time passes the peaceful happy mood of the beginning of the play changes to a nervous one and the protagonist approaches her doom. We can feel the same anxiety that the central characters feel from passing of the time. ...read more.

My father, my mother, I myself? I myself? I haven't got a self at all, I haven't got a thought which I don't get from my father, I haven't got a passion which I don't get from my mother, and the latest phase the equality of men and women that I got from my fiance, whom I called a scoundrel for his pains. How then can it be my own fault?? But Nora doesn?t understand her problem until the last pages of the play when she observes the reaction of her husband to her secret. The second difference between these two characters is their treatment of the problem. Miss Julie completely knowing her problem never takes a chance to leave her father and to find her true identity. Even when she is obliged to leave the house and flee because of the so called shame she has brought to her father, she asks Jean to accompany her although she hates him. She can?t be independent from men, she finds it impossible to leave home and live on her own, she can?t think and act independently and she even begs Jean to give her orders. ...read more.

She suggests that changing the places of males and females in society or even mixing them causes catastrophe, and he also elaborates the naturalistic belief that one has no role in making his or her own future. Another difference between the two plays may be in the approach the writers have taken to build up to the final incidents of the plays. Strindberg uses not logically organized dialogues as it may happen in natural life. But in A Doll?s House there are lots of carefully chosen sentences uttered by character that all in all may give us a clue what the character will do in the future. For example Helmer?s fine speeches about how he hates borrowing money and being in debt and his criticizing Krogstad for the crime he has committed, all ironically point to his possible reaction to finding out about Nora?s secret. As a conclusion, we can say that Miss Julie written as a response to A Doll?s House tries to question the feministic values of Ibsen?s work and for this reason either intentionally or no has been influenced by A Doll?s House. ...read more.