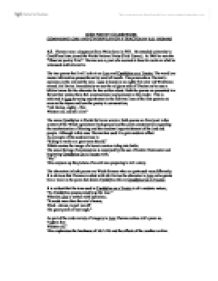 GCSE POETRY COURSEWORK COMPARING LORE AND CYNDDYLAN ON A TRACTOR BY R.S. THOMAS R.S. Thomas was a clergyman from Wales born in 1913. He attended university in Cardiff and later joined the Welsh National Party (Plaid Cymru). In 1965 he won the "Observer poetry Prize". Thomas was a poet who seemed to base his work on what he witnessed and believed in. The two poems that I will look at are Lore and Cynddylan on a Tractor. The word lore means information passed down by word of mouth. The poems show Thomas's opinions on the old and the new. Lore is based on an eighty five year old Welshman named Job Davies. Immediately we see the religious side of Thomas as he uses a biblical name for the character he has written about. Both the poems are presented in a format that makes them feel conversational and personal to the reader. This is achieved in Lore by using enjambment in the first two lines of the first quatrain to remove the rhyme and turn the poetry to conversation; "Job Davies, eighty - five Winters old, and still alive" The name Cynddylan is Welsh for brave warrior. ...read more.

The eye-rhyme consists of the words arse and hearse. The reader sees the rhyme but does not hear it when it is read aloud. The purpose of this was to show great contrast as one is rude, coarse and rough whilst hearse is gloomy and melancholy. The two used together gives an element of shock. During Cynddylan's transition from the old to the new he has become inhuman explained in this metaphor; "His nerves metal and his blood oil." Thomas goes on to criticise Cynddylan as he hasn't quite mastered the new controls and gears to operate the tractor. This is told to the reader when Thomas writes; "The clutch curses, but the gears obey His least bidding, and lo he's away" Thomas suggests the tractor almost had a mind of its own taking off like a rocket; "Out of the farmyard, scattering hens." The metaphor; "What's living but courage?" Is a representation of the courage Job shows in his life while working through the hardships with an optimistic outlook. The lines; "What's living but courage? Paunch full of hot porridge," Incorporate a half rhyme that shortens the vowel sound to achieve this. ...read more.

He is hinting that the machine eats up the human's individuality and spirit to make them all part of the machine. The last line of the poem Lore is a Aphorism and it is a continuation of the advice that Job gives. It says live large, man, and dream small. Here Thomas is telling the reader to live to life' full potential but do not fantasise about what could be. Cynddylan On A Tractor on the other hand finishes with the rhyming couplet; "All the birds are singing, bills wide in vain, As Cynddylan passes proudly up the lane. The first line of this couplet is metaphorically saying that no matter what is said to try and stop the advance of mechanisation it will all be in vain. The second line then is a final sardonic remark about Cynddylan. The poems written by Thomas are of a very high quality as he uses a wide range of poetic methods and he cleverly installs his ideas and beliefs throughout the Poems. To make the poems so impacting on the reader and to have a strong contrast between the two characters he used a medieval technique known as the ideal and the complaint. Here Job Davies is the ideal and Cynddylan is the complaint. Stephen Lynn ...read more.