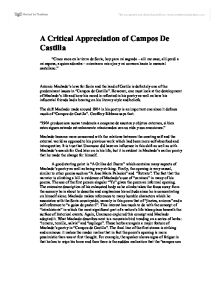 A Critical Appreciation of Campos De Castilla "Cinco anos en la tierra de Soria, hoy para mi sagrada - alli me case, alli perdi a mi esposa, a quien adoraba - orientaron mis ojos y mi corazon hacia lo esencial castellano." Antonio Machado's love for Soria and the land of Castile is definitely one of the predominant issues in "Campos de Castilla". However, one must look at the development of Machado's life and how his mood is reflected in his poetry as well as how his influential friends had a bearing on his literary style and beliefs. The shift Machado made around 1904 in his poetry is an important one since it defines much of "Campos de Castilla". Geoffery Ribbans says that: "1904 produce una nueva tendencia a ocuparse de asuntos y objetos externos, si bien estos siguen estando estrechamente relacionados con su vida y sus emociones." Machado became more concerned with the relations between the creating self and the external world as opposed to his previous work which had been more self-absorbed and introspective. It is true that Unamuno did have an influence in this shift as well as with Machado's search for God later on in his life; but it is evident in Machado's earlier poetry that he made the change for himself. A good starting point is "A Orillas del Duero" which contains many aspects of Machado's poetry as well as being very striking. ...read more.

Complementing this bitter retrospective view is the present countryside which now appears to be derelict with: "campos sin arados, regatos ni arboledas" "decrepitas ciudades" and "caminos sin mesones". This use of the past, present and the future in Machado's poetry enables him, in most cases, to look upon the past as being better times and the future as a chance for progress and optimism. This is characterised by the ending of the poem in which the "meson" is now open and Machado appears to be more upbeat on seeing the two weasels. Machado demonstrates a more hostile side to himself in a group of poems directed at rural life. He says: "Y cuando se pasa...de los pueblos a las aldeas y a los campos donde florecen los crimenes sangrientos y brutales, sentimos que crece la hostilidad del medio..." "Por tierras de Espana" is a poem which associates such landscape with rural vice. Machado's impression of such a landscape has an air of fantasy. Firstly, the extreme contrast of weather conditions gives the countryside a harsh environment. The men in this poem are depicted as having completely criminal minds; they appear to have simple emotions. Finally, the land itself is associated with crime and sin when it is associated with Cain. Other poems such as "Un criminal" and "Un loco" also depict a country in which sin is rife. ...read more.

In fact it is difficult to imagine that they hadn't been there in the first place. The death of Leonor in 1911 obviously had a great impact on Machado's life and his poetry. Both "A un olmo seco" and "A Jose Maria Palacios" are poems which relate to his wife, the latter being more explicit. The elm tree is being depicted in relation to the three time elements: past, present and future. The past is what has happened to it; the present is Machado describing it and the future is the possibility of what might happen to it. The crucial phrase in the poem is "quiero anotar en mi cartera" - an intervention by Machado which makes one revise what the poem is primarily about. One could say that the tree can be paralleled with his wife since both are dying. The green leaves which have sprouted convey Machado's hopes and therefore showing signs of life but even this description is in the past tense. The last three lines are a more personal statement made by Machado - that spring may bring a miracle of life - thus saving Leonor. In "A Jose Maria Palacio" the description of the Soria landscape is a composition of many previous images which gives a perfection to it. For example, "los chopos del rio" appears in "Campos de Soria". The new leaves on the elm tree mirror those in "A un olmo seco" and the herbs are similar to those in "A Orillas del Duero" and so on. ...read more.