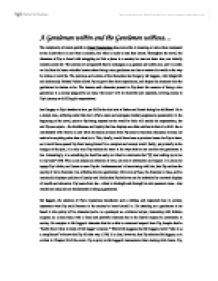 A Gentleman within and the Gentlemen without&amp;#133; The complexity of moral growth in Great Expectations

A Gentleman within and the Gentlemen without... The complexity of moral growth in Great Expectations does not suffer in meaning or value when compared to the clich� that it is not what is outside, but what is inside a man that counts. Throughout the novel, the character of Pip is faced with struggling to find a place in a society he was not born into, nor initially morally suited for. The journey of self-growth that he undergoes is a gradual and subtle one, and it is often we find that he learns valuable lessons about being a true gentleman too late to restore his world to the way he wishes it could be. The journeys and actions of the characters Joe Gargery, Mr Jaggers, Abel Magwitch and (indirectly) Herbert Pocket allows Pip to grow from their experiences, and shapes his character into the gentleman he desires to be. The lessons each character present to Pip about the essence of being a true gentleman in a society plagued by so many who aren't will be identified and explored, to bring clarity to Pip's journey to fulfilling his expectations. Joe Gargery is Pip's brother-in-law, yet fulfils the dual role of father and friend during his childhood. He is a simple man, suffering under Mrs Joe's (Pip's sister and surrogate mother) suppressive personality. In the beginning of the novel, prior to Pip being exposed to the world he feels will satisfy his expectations, Joe and Pip are equals - the humbleness and loyalty that Joe displays are often similar to that of a child. ...read more.

(196) It is clear, however, that Pip admires Mr Jaggers, as is evident in Chapter 20 of the novel. Pip is privy to Mr Jaggers' mannerisms when dealing with clients. Pip, despite being introduced to Mr Jaggers' character in this manner, is clearly infatuated with his power and status and accepts him as a gentleman. Ironically, Mr Jaggers' was not born into wealth either, but rather worked his way up to his position of power. Pip ignores this fact, and it is only after he learns the truth about his journey to becoming a gentleman that he realises that Mr Jaggers does not represent a true gentleman either. He is yet another representation of how wealth and power are in fact far removed from being a gentleman. The irony is that Mr Jaggers' true character is never hidden from Pip, and thus so great are his expectations, that he is blinded to the blatant truth about a true gentleman's role in society. The character Abel Magwitch (initially referred to as the convict, and only revealed as Pip's benefactor as the climax of the novel) is not only the catalyst to a growth into manhood and morality for Pip, but the character from whom Pip learns the most from during their interaction. As the convict, Magwitch is nothing but a source of latent fear for Pip. ...read more.

Pip chooses to misuse the wealth that is bestowed upon him, and it is after Pip learns the valuable lessons from Joe, Jaggers and Magwitch, that he realises that Herbert is the gentleman he aspires to become. While the irony of the source of Herbert's wealth being indirectly from Pip is not unclear and certainly not unimportant, is it Pip's realisation that it is not the source of wealth and status that makes one a gentleman, but the manner in which one's character is displayed in the consequences of one's actions. Pip learns to assume responsibility from his destiny from the success of Herbert. It is evident that valuable lessons about the character displayed in actions are prevalent in Great Expectations. Joe, Jaggers, Magwitch and Herbert (albeit not as forcefully) offer insight into the quality of one's character as an internal embodiment of class. Jaggers fails to impress, whereas Magwitch and Joe display varying yet quintessential attributes of gentlemen. Herbert is the opposite pole to Jaggers, representing what Pip can become by embodying gentlemanly characteristics, rather than trying to live like one. Pip learns various aspects of the same intrinsic lesson from all these characters: that is it not the quality of the life of the man, but the quality of the man, that speaks of his character. Pip loses this sense during the course of the novel, and it is the interaction with these characters that gradually return him to a path of fulfilling his greatest expectations and dreams. ...read more.