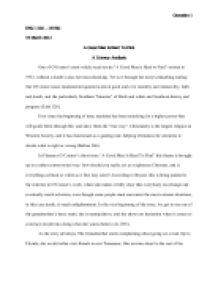 &quot;A Good Man Is Hard To Find&quot; by Flannery OConnor. A Literary Analysis

ENC 1102 - 151961 19 March 2012 A Good Man Is Hard To Find A Literary Analysis One of O'Connor's most widely read stories "A Good Man is Hard to Find" written in 1953, without a doubt is also her most shocking. Yet is it through the story's disturbing ending that O'Connor raises fundamental questions about good and evil, morality and immorality, faith and doubt, and the particularly Southern "binaries" of black and white and Southern history and progress (Link 126). Ever since the beginning of time, mankind has been searching for a higher power that will guide them through life, and show them the "true way". Christianity is the largest religion in Western Society, and it has functioned as a guiding rule, helping Christians for centuries to decide what is right or wrong (Bethea 246). In Flannery O'Connor's short story "A Good Man Is Hard To Find" this theme is brought up in a rather controversial way: how should you really act as a righteous Christian, and is everything as black or white as it first may seem? ...read more.

This belief contradicts her Christian faith, of course, but in the end her Christian faith results in the achievement of Grace. Grace, an important theme to O'Connor, is given to both The Grandmother and The Misfit, neither of whom particularly deserves. As she realizes what is happening, The Grandmother begins to beg The Misfit to pray so that Jesus will help him. Right before The Misfit kills her, The Grandmother calls him one of her own children recognizing him as a fellow human capable of being saved by God's Grace (Mitchell 212). Even though he murders her, the Misfit is implied to have achieved some level of Grace as well when he ends the story by saying, "It's no real pleasure in life". Earlier in the story, he claimed the only pleasure in life was meanness (O'Connor 16). The glorification of the past is prevalent in this story through the character of The Grandmother, who expresses nostalgia for the way things used to be in the South. ...read more.

Right after The Grandmother identifies The Misfit, he comments, "Don't see no sun but don't see no cloud neither," implying that their fates have not yet been decided. But after Bailey and John Wesley have been murdered, as The Mother and June Star are being led into the woods as well, The Grandmother notices that "there was not a cloud in the sky nor any sun," and now it indicates that she has nothing from which to get her bearings: "there was nothing around her but woods." There is no hope (Bloom 1). Flannery O'Connor saw herself as a prophetic writer and her authorial strategy was to shock; her fiction is intended as a rebuke to rationalistic, materialistic, and humanistic thought; the heresies of the twentieth century. She believed that people in the modern world were not following the true path and had to be made to see their condition for what it was; a wandering by the wayside. In "A Good Man Is Hard To Find" the family's wayward lives are given direction in their final moments, and from O'Connor's point of view they are at last on the right road (116). ...read more.