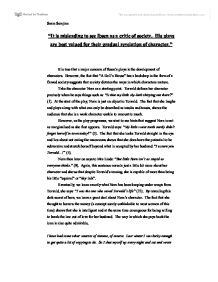 It is misleading to see Ibsen as a critic of society. His plays are best valued for their gradual revelation of character.

"It is misleading to see Ibsen as a critic of society. His plays are best valued for their gradual revelation of character." It is true that a major concern of Ibsen's plays is the development of characters. However, the fact that "A Doll's House" has a backdrop in the form of a flawed society suggests that society dictates the ways in which characters mature. Take the character Nora as a starting point. Torvald defines her character precisely when he says things such as: "Is that my little sky-lark chirping out there?" (1). At the start of the play, Nora is just an object to Torvald. The fact that she laughs and plays along with what can only be described as insults and teases, shows the audience that she is a weak character unable to amount to much. However, as the play progresses, we start to see hints that suggest Nora is not as marginalised as she first appears. Torvald says: "My little sweet tooth surely didn't forget herself in town today?" (5). The fact that she looks Torvald straight in the eye and lies about not eating the macaroons shows that she does have the potential to be subversive and stretch herself beyond what is accepted by her husband: "I assure you Torvald...!" ...read more.

In the final scene, when all is revealed about Nora's loan and her secret toil, Torvald's response is to shun Nora and blame her for tarnishing his reputation: "Now you have ruined my entire happiness, jeopardised my whole future." (76). As far as Nora is concerned, this moment in the play is the turning point for her. Her mistreatment and urge for transgressive behaviour which have been kept under control by her throughout the play finally overpower her and she finally awakens to what is happening around her, I have been performing tricks for you, Torvald. That's how I've survived. You wanted it like that. You and Papa have done me a great wrong. It's because of you I've made nothing of my life. This moment is powerful in terms of the revelation of Nora's character, she will no longer be marginalised and she can finally be free from Torvald's tyranny. Torvald is another character who is gradually revealed throughout the play. He begins as a domineering and forceful husband and although he tries to maintain a hold on Nora, he is later revealed to be a weak and self conscious man. ...read more.

I did, too; but I didn't have the courage..." (53). Although the revelation of his character is not as clear as Nora's and Torvald's, there is still a change in him from the beginning. We as the audience are compelled to feel at least some sympathy for him, as he tries in vain to salvage his reputation in order to save his children from hardship. In conclusion, it is fair to say that a major concern of Ibsen's play is the revelation of characters, however, we cannot ignore the criticisms of society which are without a doubt present in his works. In "A Doll's House", Ibsen shows us how Nora transforms herself from a submissive and marginalised housewife, to a free and independent woman, while Torvald loses the power he thought he had. Perhaps it is because of society that people can only gradually reveal their characters. Nora longs to say "damn", but because it is seen as socially unacceptable to say it, she must refrain. Ibsen could be seen as criticising society's boundaries because they stop people from expressing themselves. ...read more.