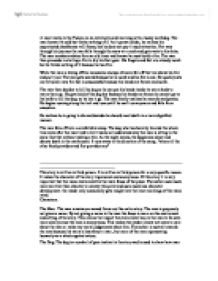 A man travels in the Yukon on an extremely cold morning with a husky wolf-dog.

A man travels in the Yukon on an extremely cold morning with a husky wolf-dog. The man knows it's cold but thinks nothing of it. As it grows colder, he realizes his unprotected cheekbones will freeze, but he does not pay it much attention. Part way through his journey the man falls through the snow at a creek and gets wets to his shins. The man remebers advice from an old timer and knows he must build a fire. The man then proceeds in starting a fire to dry his foot-gear. His fingers and feet are already numb but he thinks nothing of it because he has fire. While the man is taking off his moccasins clumps of snow fall off the tree above his fire and put it out. The man gets scared because he is numb and his fire is out. He quickly sets out to build a new fire but is unsuccesful because his hands are frozen and numb. The man then decides to kill his dog so he can put his hands inside its warm body to warm them up. He gets hold of the dog but because his hands are frozen he cannot get to his knife to kill the dog. so he lets it go. ...read more.

The fire is used as a metaphor after the snow puts out the fire and the man must try to build the fire again. The author writes "He cherished the flame carefully and awkwardly. It was life" The author uses this to show how the fire dictates whether the man will live or die and shows the man is dicated by the power of nature. A simile is used a page later after the man had failed in his attempt to make the fire. the author compares the mans hands to weights when he writes " he had an impression that they hung like weights on the end of his arms" the author uses this simile to show the uselessness of the mans hands because they are numb and frozen. After the man falls into the water the author adds the line "he was angy, and cursed his luck aloud". The authors diction here by using the word "luck" implies the situation was out of the mans control. The author also uses the word "accident" to describe the situation. This also implies it seems fate and the man could not have avoided it. Later after the the snow fell from the tree and put out the fire the author uses an antithesis in the line "his own fault or, rather, his mistake." ...read more.

This is used to show indeference of the man and the author to the man and show the importance of the enviroment in the story. This gives the reader a sense of power the enviroment has over the man. The next rhetorical shift in the very next paragrahp serves to strengthen the message fo the last shift. The shift happens when the author is describing how the mans spit freezes in the air as it falls to the ground, and that it is "undoubtedly colder than fifty below"-but the temperature did not matter. The literary style used by the author and the use of building the narrative rather than the character really works in bringing the message accross to the reader. By focusing less on building the character we can see the auhtors comparison to mankind as whole much easier. In personifiying and builidng the enviroment the author relays to the reader the sense that mans actions are dictated by his enviroment. This really realy the message that man has no free will and that nature has already mapped his fate. By using the words "luck" and "accident" the contrasting "fault" with "mistake" the author succeeded in showing gray area in the man's responsibility; while he should have anticipated the results of his actions, and thus be held liable, he did not, so he cannot be held liable. All together the authors literary style really brought the piece together and made it work. ...read more.