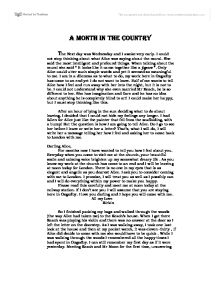 a Month in the country

a Month in the country The Next day was Wednesday and I awoke very early. I could not stop thinking about what Alice was saying about the mural. She said the most intelligent and profound things. When talking about the mural she said " It looks like it came together like a jigsaw ". Only Alice could utter such simple words and yet it seemed so meaningful to me. I am in a dilemma as to what to do, my work here in Oxgodby has come to an end yet I do not want to leave. Half of me wants to tell Alice how I feel and run away with her into the night, but it is not to be. I could not understand why she even married Mr Keach, he is so different to her. She has imagination and flare and he has no idea about anything he is completely blind to art! I could make her happy, but I must stop thinking like this. After an hour of lying in the sun deciding what to do about leaving, I decided that I could not hide my feelings any longer. I had fallen for Alice just like the painter that fell from the scaffolding, with a bump! But the question is how I am going to tell Alice. ...read more.

Meeting Keach and Mr Moon for the first time, uncovering the mural and having my regular visits from Kathy EllerBeck and the Gramophone . Not forgetting the first time I saw Alice with her beautiful hair and dazzling smile. Just as I could see the end of the path leading to the road, I remembered the time when Alice and I were walking through the wood and I heard that dreadful sound from the Colonels gun . Alice was so understanding she did not ask lots of questions she just comforted me with her calming voice. When Alice returned from trimming her roses she noticed the letter under the plant pot. She opened the letter curiously, and then sat down on the step, she was completely shocked. As the tears rolled down her face she recalled all the time she had spent with Birkin. She had had some of the happiest times of her life being with him, he had made her happier than Keach ever had. This was her only chance to be free from the Keach and the hold he had on her. Alice made up her mind quickly and packed her clothes and the few items she could take without Keach realising. ...read more.

Meanwhile Birkin was standing on the platform with his bags in his hands and the same clothes he was wearing the day he arrived in Oxgodby. He looked once again at his pocket watch, the train would be leaving any time. Then the conductor ushered Birkin onto the train. He was heartbroken, he thought Alice had decided to stay with Keach and not come with him to London. As he stepped onto the train and pushed the window down on the door, he heard the sound of the conductor's whistle. As soon as the steam of the train hit the clean Oxgodby air his dreams of being with Alice were shattered. He turned away from the open window as the platform disappeared in a cloud of steam and smoke. Tragically Alice arrived at the railway station too late and stood helpless as the train pulled away off the platform and trundled into the distance. Just like her dreams, it was all just a grasp away and a moment too late. She turned from the platform to begin a long and sombre walk home, as she walked she reflected on her recent past and wished she could have changed so many things, and it was a confused conductor who heard her say " the past is a foreign country , they do things differently there ." ...read more.