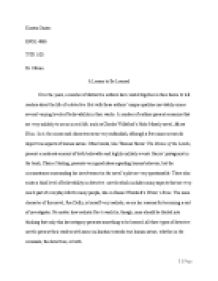 A number of authors present scenarios that are very unlikely to occur in real life, such as Charles Willefords Hoke Mosely novel, Miami Blues and Thomas Harris The Silence of the Lambs

﻿Kirsten Gunter ENGL 4866 T/TR 1:00 Dr. Moran A Lesson to Be Learned Over the years, a number of distinctive authors have united together in their desire to tell readers about the life of a detective. But with these authors? unique qualities inevitably comes several varying levels of believability in their works. A number of authors present scenarios that are very unlikely to occur in real life, such as Charles Willeford?s Hoke Mosely novel, Miami Blues. In it, the crimes and characters seem very outlandish, although a few minor scenes do depict true aspects of human nature. Other books, like Thomas Harris? The Silence of the Lambs, present a moderate amount of both believable and highly unlikely events. Harris? protagonist in the book, Clarice Starling, presents very good ideas regarding human behavior, but the circumstances surrounding her involvement in the novel?s plot are very questionable. There also exists a third level of believability in detective novels which includes many aspects that are very much part of everyday life for many people, like in Daniel Woodrell?s Winter?s Bone. The main character of this novel, Ree Dolly, is herself very realistic, as are her reasons for becoming a sort of investigator. No matter how realistic Ree?s world is, though, none should be fooled into thinking that only this last category presents something to be learned; all three types of detective novels present their readers with some inclination towards true human nature, whether in the criminals, the detectives, or both. Miami Blues presents its readers with both criminal and detective being fairly unrealistic. ...read more.

Miami Blues uses these real-life racial tensions and Hoke?s human fear in killing Freddy to give its readers a glimpse of true human nature. And while that glimpse is nice to see, it is merely a breath of fresh air amidst the hilarious onslaught of ridiculousness. The Silence of the Lambs is a prime example of the detective novel falling into the middle of the believability scale. There are many components of the novel which do reflect real life, but one aspect of the novel is simply so unrealistic that it knocks the entire book down from full believability: Starling as a student at the FBI Academy and as the agent assigned to a national top priority issue. Throughout the entire novel, Starling is rushing from location to location, studying for tests whenever she can find the time. In the Academy and in the FBI itself, everyone knows and reminds the reader repeatedly that Starling risks being ?recycled? if she misses her finals, or fails due to lack of study time. Being recycled is not the fastest way to advance an agent?s career as they are booted from the Academy until another spot eventually opens up. Starling is risking all she has worked for because of the Buffalo Bill case, but she continues working on it all the same. Starling?s persistence on the Buffalo Bill case is not completely surprising, however, as she is passionate about helping the victims and about gaining real experience. More surprising is her being appointed to the case in the first place. ...read more.

A plethora of cases exist in which young girls are the victims, and an abundance in which one person committing heinous acts against numerous women, from Ted Bundy to Gary Heidnik. Even more interesting than having the victim be female is having the assailant be female. This scenario, too, has real life examples, one famous example lying in Aileen Wuornos. During a special hearing for Wuornos deliberating her fate for the slaying of several men, she herself told the judge, ?I will kill again. I?ve got hate crawling through my system. There is no point in sparing me. I?m a waste of the taxpayers? money? (Newton, 291). Knowing that there really are women who feel this way, who feel so naturally violent towards others, makes believing the stories in Winter?s Bone that much more believable and eye-opening. While all detective novels fall somewhere along the scale of believability, the believable aspect of the novels is not the most important one. In fact, a novel can still be very entertaining and informative of real-life circumstances while not being believable on the whole, like we see in Miami Blues. No matter how entertaining the novel, though, the nods toward true human nature that are presented to readers are a big part of what makes the detective novel a worthwhile read. ?Abnormal? human nature and behavior is an addicting subject to readers today; reading about real aspects of human life, things that really do happen not only in the pages we hold but also in the world we behold, allows the reader to relate to the characters in some sense. This relation to and learning about the characters could, in turn, cause readers to learn something about themselves. ...read more.