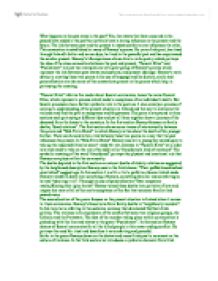 Funeral Rites and Punishment are just two examples out of a great group of Heaneys poems which represent the link between past events and customs, and present ideology. Heaneys main device in creating these two poems is his use of langua

What happens in the past stays in the past? Yes, the events that have occurred in the passed have ended in the past but certainly have a strong influence on the present and the future. The link between past and the present is indestructible as one influences the other. This connection is established in many of Heaney's poems. He ,as an Irish poet, has lived through Ireland's better and worse days; he lived in the peaceful past and has experienced the sombre present. Heaney's life experience allows him to write poetry which portrays the idea of the close connection between the past and present. "Funeral Rites" and "Punishment" are just two examples out of a great group of Heaney's poems which represent the link between past events and customs, and present ideology. Heaney's main device in creating these two poems is his use of language and his diction, simile and personification are also some of the conventions present in the poems which help in portraying the meaning. ...read more.

Through his use of personification "Dear soapstone masks,/Kissing their igloo brows" Heaney turned these deaths into portraits of love and respect but most of all of the one's acceptance of the fact that someone familiar had passed away. The second section of the poem focuses on the present situation in Ireland when it comes to ritual ceremonies. Heaney's focus turns from family deaths to "neighbourly murders". In this term he is referring to the sectarian violence that dominated Northern Irish politics. This violence is an expression of the conflict between two religious groups, the Catholic and the Protestant. The idea of the murders taking place within communities is picked up with this line and relates to the poem "Punishment". In this section Heaney dreams of funeral ceremonies for all the killed people in this never-ending conflict. He portrays the need for ritual and describes it as comforting and peaceful. So far in the poem Heaney draws on the distant and recent Irish past to comment on the culture of violence. ...read more.

"My poor scapegoat" indicates that she alone is the victim of the crime of adultery since her partner in crimes isn't punished because he is male. Although Heaney can feel this injustice he shows his helplessness in helping her. His role is the role of a "voyeur" which is evident in the last two stanzas of the poem as he creates the atmosphere of a passive observer and links the past and present. He compares the brutality of an ancient tribal man to the brutality of Irish Revolutionary Army. What Heaney is trying to portray is that the criminals are different but the form of brutality is the same. In both the past and the present innocents are victimised by their own community in Ireland. He emphasises this point by the term "your betraying sisters", which represent other Irish girl who were brutally killed on account of betraying their country by marrying British soldiers. Heaney himself is Irish but he talks about the internal contradictions in Irish community and explores the dark sports of human history in Irish Culture and how it relates to the present affairs in Ireland. ...read more.