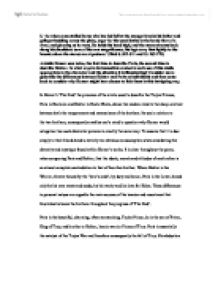 A simile Homer uses twice, the first time to describe Paris, the second time to describe Hektor. In what ways in its immediate context is each use of this simile appropriate to the character and the situation it is illuminating?

5. 'As when come stalled horse who has fed full at the manger breaks his halter and gallops thudding across the plain, eager for his usual bathe in the lovely flow of a river, and glorying as he runs. He holds his head high, and the mane streams back along his shoulders: sure of his own magnificence, his legs carry him lightly to the haunts where the mares are at pasture.' (Iliad 6. 502-511 and 15. 263-270) A simile Homer uses twice, the first time to describe Paris, the second time to describe Hektor. In what ways in its immediate context is each use of this simile appropriate to the character and the situation it is illuminating? Consider more generally the differences between Hektor and Paris as individuals and then come back to consider why Homer might have chosen to link them in this intriguing way. In Homer's 'The Iliad' the presence of the simile used to describe the Trojan Princes, Paris in Book six and Hektor in Book fifteen, draws the readers mind to the sharp contrast between both the temperament and mannerisms of the brothers. Its use in relation to the two brothers, consequently enables one's mind to question why Homer would categorise two such dissimilar persons in exactly the same way. To assume that it is due simply to their blood-bond is entirely too obvious an assumption when considering the diversity and mystique found within Homer's works. ...read more.

him one to one in grim combat"1 is belied by hid lack of courage when he sights Menelaos across the battlefield; "so godlike Alexandros slipped back into the body of the proud Trojans in his fear of Atreus' son."2 Paris' immediate and cowardly retreat into hiding behind the strong ranks of the Trojan army is a shameful and embarrassing act to be preformed by a man of such defined royal blood. Hektor is Paris' parallel in both personality and dispostion. He is a paragon for everything Homeric Hero's stand for; he is courageous, loyal and fearsome and seeks to claim both honor and glory. But unlike his major adversary Achilleus, he is not completely void of emotion and does not feign indifference or superiority to the people who surround him. Hektor is not only a commanding and impressive leader of the Trojan forces but also a devoted husband and father, who is capable of expressing compassion and affection when dealing with his wife and family. The scene in book six where Hektor unknowingly informs Andromache of the fate which will befall not only her, but also himself and their infant son Astyanax, is one of the most moving moments in the whole poem. Hektor's speech to his wife not only shows the reader the strength of Hektor's love for his family but also gives insight into the extent of which Hektor is a prisoner of the 'Hero's code'. ...read more.