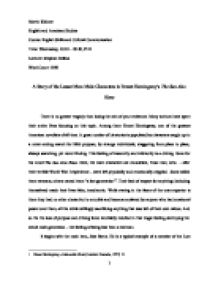 A Story of the Lesser Men: Male Characters in Ernest Hemingway's The Sun Also Rises

Martin Klekner English and American Studies Course: English Skills and Cultural Communication Time: Wednesday, 19.10 - 20.40, P111 Lecturer: Stephan Delbos Word Count: 1920 A Story of the Lesser Men: Male Characters in Ernest Hemingway's The Sun Also Rises There is no greater tragedy than losing the aim of your existence. Many authors have spent their entire lives focusing on this topic. Among them Ernest Hemingway, one of the greatest American novelists of all time. A great number of his stories is populated by characters caught up in a never-ending search for life's purpose, by strange individuals, staggering from place to place, always searching, yet never finding. This feeling of insecurity and inferiority is a driving force for his novel The Sun Also Rises. Here, the main characters are ex-soldiers, those men, who - after their terrible World War I experience - were left physically and emotionally crippled. Some called them veterans, others named them "a lost generation"1. Their lack of respect for anything (including themselves) made their lives fake, inauthentic. While staring in the faces of the ones superior to them they had no other choice but to crumble and become enslaved by anyone who had emotional power over them, all the while willingly sacrificing anything that was left of their own values. And so the the loss of purpose and driving force inevitably resulted in that tragic feeling destroying the whole male generation - the feeling of being less than a real man. ...read more.

He also despises Catholics, calling them a "Klan"5. The reason for this behavior is his resentment for people with strong beliefs and values, a typical trait of the Lost Generation. Michael Campbell is the third war veteran of the story, yet another character to share the typical vices of his friends. However, where Jake suffers because of his injury and Bill makes jokes to ease his war trauma, Mike's insecurity manifests in his extreme lack of direction. He is a son to wealthy parents, a spoiled child, absolutely unable to recognize the value of money or find a proper job. He openly admits: "I'm a tremendous bankrupt. (...) I owe money to everybody."6 He is also rude and aggressive. This becomes evident every time he gets drunk - he absolutely lacks moral scruples. When Robert Cohn starts coming on to Brett, Mike keeps insulting him in fruitless attempts to drive him away from his girlfriend. He openly declares what others only secretly think, among other things that Cohn is a Jew who didn't go to war, which makes him a target for general hatred. Yet his insecurities are quickly revealed when dealing with Brett's unfaithfulness. Instead of confronting her directly, instead of revealing that Jake is her lover too, instead of facing Pedro Romero, he keeps attacking the weakest opponent, Cohn. ...read more.

Love for Brett and his injury - that is his never-ending struggle. In the end the only thing that transforms is the fact that Jake eventually realizes his own weakness, how foolish and manipulated has he become. "We could have had such a damned good time together,"10 says Brett in the last chapter and he answers: "Yes, isn't it pretty to think so?"10 The weaknesses, aimlessness and (in Jake's case) impotency of the main male characters of The Sun Also Rises, their inability to be strong-enough men with clear set of values, result into their insecurity, which drives them from one place to another, forming a story of endless search for purpose. Jake keeps his neutral attitude, yet behind it cowardice hides, for he is a character so afraid of his diminished manhood that he can not face anything, not even his own feelings. Bill tries to evade facing the reality by making fun of it. Mike drowns himself in alcohol in order to get enough courage to stand up to Brett and let her know her affairs hurt him - yet he never really does so. Their main problem lies in the fact, that they are all unable to clearly state for themselves, what do they expect from the world and what are they willing to accept. For such an act is the ultimate key to self-realization and leading a meaningful life. ...read more.