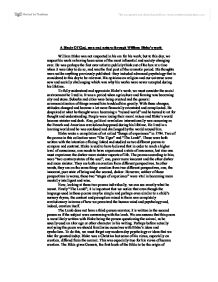 A Study Of God, man and nature through William Blake&amp;#146;s work

A Study Of God, man and nature through William Blake's work William Blake was not respected in his era for his work, but to this day, we respect his work as having been some of the most influential and society-changing ever. He was perhaps the first ever artist to publicly think out of the box at a time when it was risky to do so, and was the first poet of the romantic period. His thoughts were unlike anything previously published- they included advanced psychology that is considered to this day to be relevant. His opinions on religion and our universe were new and socially challenging which was why his works were never accepted during his lifetime. To fully understand and appreciate Blake's work, we must consider the social environment he lived in. It was a period when agriculture and farming was becoming city and stone. Suburbs and cities were being created and the general commercialisation of things around him troubled him greatly. With these changes, attitudes changed and became a lot more financially orientated and complicated. He despaired at what he thought was a becoming a "ruined world" and he turned to art for thought and understanding. ...read more.

He made visual artistic visualisations many times of this event. In his day, he felt that the world was a "fine and wonderful" place. He had a passion for nature and often observed animals and drew them. He wrote many poems on nature during his lifetime. Here, we see him using animals to try and explain his theory on creation. Blake was many things, an artist, a visionary, and a mystic. Here we see him offer his views on creation and judgment. At that time, the Catholic Church was not the perfectly holy institution that we consider it to be. There was a lot of child labour and financial corruption amongst its leaders. This truly concerned Blake. He was a very humane and morally guided man who was never afraid to stand up for his beliefs and ideas. He once said "I must create my own system or be enslaved by another man's". He was rather anarchic and had a strong tear-away attitude also however. This can be seen in his beliefs of Christianity especially. Blake believed that God, the father, was a strong, omnipotent almost tyrannical figure. He said that the son, Jesus Christ, the son was the creator of the entire world. ...read more.

God created the Lamb, Jesus, and then we were created and became conceited and self-obsessed, mistreating others and losing its values. The complexities of such simple poetry are surprising. There are many ways to consider his poetry. In this essay, I have tried to consider the world Blake lived in, the type of man he was, the type of beliefs he kept and what he could have mean to through his poetry. His poems are so knotted with symbolism and images that it is hard to emerge from exploring his work with a clear conclusion. Even by a small amount of research, it is clear that many people have understood his words in different ways. The poems are beautifully written, with incredible imagery created using perfectly effective words and similes and metaphors. They raise many more questions than they answer, but inspire us to ask ourselves questions and consider creation in a different way. His work began the Romantic Movement then, although it did not receive acclaim then. Now, it is recognised as being striking and very relevant even today. Blake was a prophet and used his mind in a way few people previously had, and in producing this poems, he has changed the way many people think about creation, which is, ultimately, what every poet's aim is. ...read more.