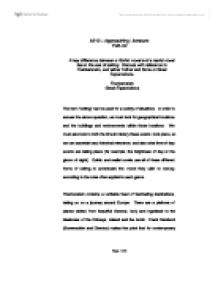 A103 Introduction to the Humanities

A210 - Approaching Literature TMA 02 A key difference between a Gothic novel and a realist novel lies in the use of setting. Discuss with reference to Frankenstein, and either Father and Sons or Great Expectations. Frankenstein Great Expectations The term "setting" can be used for a variety of situations. In order to answer the above question, we must look for geographical locations and the buildings and environments within those locations. We must also look to both the time in history these events took place, so we can ascertain any historical relevance, and also what time of day events are taking place (for example, the brightness of day or the gloom of night). Gothic and realist novels use all of these different forms of setting to accentuate the mood they wish to convey, according to the rules often applied to each genre. Frankenstein contains a veritable feast of fascinating destinations, taking us on a journey around Europe. There are a plethora of places visited, from beautiful Geneva, Italy and Ingolstadt to the bleakness of the Orkneys, Ireland and the Arctic. Frank Darabont (Screenwriter and Director) makes the point that for contemporary readers of Frankenstein, the "novel was the only way people could go on tours of the world" (TV1, A210, The OU). ...read more.

The "poisonous effects of guilt" (The Realist Novel, p.63) can also be witnessed, as Frankenstein is consumed with guilt; the horror of the people at the inn becomes just a "mockery" to Frankenstein, as their horror is a mere "shadow of the feelings that oppressed" him (Frankenstein, p.165). Shelley uses the inn scene to bring back a small sense of normality, making the contrasting horror of events intensify. Finally, the magistrate can barely believe Frankenstein's account of events and listens with a "belief that is given to a tale of spirits and supernatural events", yet another of Sedgewick's rules. Shelley commences the above episode with a realist setting, with vast descriptions of the beautiful surroundings. We hear a conversation between two lovers and are drawn into their love story, partly through the fearful anticipation of impending events. These characters are realistic because we can relate to two people in love, but who are sidetracked by fear. The passage then descends into more Gothic scenes, with Elizabeth's murder. The setting is nocturnal and the darkness and the moon (which illuminates the watching and mocking monster) add to the Gothic effect. The realism then returns, but with an ironic twist; Frankenstein sees again the same landscape as before, but this time it is with horror that he looks about him as "nothing could appear to me as it had done the day before" (Frankenstein, p.167). ...read more.

exemplify a Gothic scenario. We are then thrust into a Gothic and melodramatic episode of Miss Havisham set ablaze and running at Pip, "shrieking, with a whirl of fire blazing all about her" (Great Expectations, p.397). The description of Pip putting out the fire is full of violent metaphors as they "struggled like desperate enemies" and he holds her "forcibly down...like a prisoner who might escape" (Great Expectations, p.397). This is indeed a much darker episode, characterised by the rather disturbing image of the "disturbed beetles and spiders running away over the floor" (Great Expectations, p.397). As Dickens uses recurring phrases and echoes such as the repetition of "patches of tinder" which are "alight " and "floating" (Great Expectations, p.397 and p.398), time almost seems to be in slow motion. We are also given a stark contrast to the beautiful bride of Elizabeth, with this rather terrifying woman being thoroughly burned, but still retaining "her old ghastly bridal appearance" (Great Expectations, p.398). We can see therefore that a Gothic setting often incorporates darker and more sinister techniques, with scenes often taking place after dark or by moonlight. The setting is often rather fantastical with supernatural overtones. A realist novel would more usually incorporate surroundings that the contemporary reader would have been familiar with and could relate to. Shelley and Dickens have successfully used these techniques, on differing scales, to achieve moments of immense tension, effectively drawing their readers into their story. ...read more.