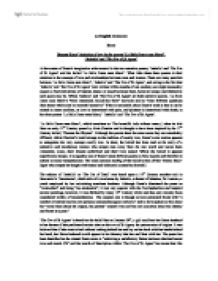 Described as a "faery's child", speaking in "language strange" and having "wild wild eyes", the reader comes to understand that she is some sort of supernatural being. The reader learns that the lady feeds the knight "roots of relish sweet", "honey wild" and manna dew", which not only denotes her intoxication of him, but also links to the scene in Shakespeare's 'Midsummer Night's Dream' where Titania, the fairy queen, feeds the mortal Bottom. She takes the knight to her "elfin grot" where he shuts her eyes "with kisses four." What is paradoxical about his closing of her eyes is that she is then said to "lull" him asleep, which suggests her potentially treacherous nature, lulling him into a false sense of security. Her responsibility for the knight's circumstance is confirmed by the dream he has of "pale kings and princes too" who cry "La Belle Dame sans Merci Hath thee in thrall!" His dream is to realise that he was just another one of the many men who have been tricked by 'La Belle Dame.' He wakes a changed man in a changed world, as the bleak "cold hill side" juxtaposes the previous images of passion he shared with his lady. The brief affair between the lovers in 'La Belle Dame sans Merci' is ambiguous owing to the fact that it is not explicit as to who seduced who, but also since their communication is implicit, the reader can never be sure of who was in control. ...read more.

The fate of the knight in 'La Belle Dame sans Merci' relates to Keats's own fear of opening up to or appearing vulnerable women, whilst the humble Lorenzo in 'Isabella' is murdered after falling in love. Keats's ambivalent attitudes towards women demonstrate how he was very much a man of his time. It has been argued that in the earlier poems the temptation to escape the responsibility of adulthood is projected onto an entrancing female. Keats's recognition that this temptation must be resisted is in turn suggested by the way he punished his male lovers, leaving them forlorn or wounded from an experience of love. "The strains are also evident in the narrative poems, but here the damage to their poetic coherence can be greater. 'Isabella', in particular, must be counted as a failure. Keats himself thought little of it ('A weak-sided Poem', he called it, 'with an amusing sober-sadness about it'), and it has numerous mishaps of taste, style and tone. Yet there are few poems in the language that show greater promise, and Keats deserves more credit than is usually given for the dramatic balance between the secret ceremony of love life and joy in the first half of the poem and of love, death and grief in the second." "Of that larger effort to find a completely satisfying image which integrates movement and stillness, time and eternity, mortality and immortality, we can say that he did finally achieve what he was seeking. ...read more.

Analysis of KeatsÃ¢â‚¬â„¢ To Autumn