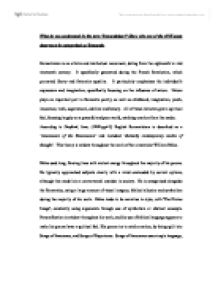 According to Duxford, Icon, (1999:pg4-5) English Romanticism is described as a 'renaissance of the Renaissance' and included 'distinctly contemporary modes of thought'. This theory is evident throughout the work of the romanticist William Blake.

What do you understand by the term 'Romanticism'? Show why any of the ONE poets deserves to be catogorised as 'Romantic Romanticism is an artistic and intellectual movement, dating from the eighteenth to mid nineteenth century. It specifically generated during the French Revolution, which promoted liberty and fraternity equality. It particularly emphasises the individual's expression and imagination, specifically focusing on the influence of nature. Nature plays an important part in Romantic poetry, as well as childhood, imagination, youth, innocence, truth, supernatural, sublime and beauty. All of these elements give a spiritual feel, focusing largely on a peaceful and pure world, catching emotion from the reader. According to Duxford, Icon, (1999:pg4-5) English Romanticism is described as a 'renaissance of the Renaissance' and included 'distinctly contemporary modes of thought'. This theory is evident throughout the work of the romanticist William Blake. Blake used long, flowing lines with violent energy throughout the majority of his poems. He typically approached subjects clearly with a mind unclouded by current options, although this made him a controversial outsider in society. He is categorised alongside the Romantics, using a large amount of visual imagery, biblical allusion and symbolism during the majority of his work. Blake tends to be narrative in style, with 'The Divine Image', constantly using arguments through use of symbolism or abstract concepts. ...read more.

The titles differ with 'The Divine Image' in Innocence and 'A Divine Image' in Experience, which highlights 'The' standing for unruly, and 'A' for individualism. The personified 'Mercy, Pity, Peace and Love' are listed at the beginning of the poem, showing the four influences of a peaceful world. All of these elements are true to the human soul, with Blake giving a spiritual approach here. He is explaining that these characteristics are all associated with God, although humans are all capable of symbolising these areas. The title 'A Divine Image' immediately links to biblical imagery, with all faiths praying to 'The Divine' in God. The approach in Songs of Innocence is a simple form, with a similar approach to a hymn. The language used is frequently religious, emphasising the pre-existence of God. However, in 'A Divine Image', in the Songs of Experience, a hellish and corrupt society is portrayed, with the terms 'jealousy', 'fiery' and 'forged'. The repetition of 'human' is used during both poems, although here, in contrast is a cynical and negative poem. Interestingly, this poem is almost half the size of the first that was written, which shows contrast within the pairs of poems that Blake wrote. This particular poem has been suggested as Blake's more rhetorical songs. ...read more.

It is interesting to see the use of rhetorical questions that Blake uses at the end of each stanza, keeping the reader constantly thinking and asking themselves ambiguous questions. E.g. - Did he smile his work to see?' questioning the reader, constantly making them think. The term 'smile' sets up positive imagery, in contrast the negative language following - 'fearful.' The 'tyger' also shows contrast, with the fact that even though a beautiful image of the 'tyger' is portrayed, the animal also represents violence and fear in nature. Personification is used with the stars 'watered heaven with their tears' which sets up powerful imagery, with Blake using imagination, another element of Romantic poetry. Gray, M (1984:pg178) suggests that the imagination represents '..the minds power to create harmonious meaning out of the chaos of impressions, ideas, feelings and memories...' Here, Blake uses imagination to create various 'ideas' within the poem. Blake therefore deserves to be categorised as a Romantic, with his work particularly generating during the French Revolution. He appears to give a more confident approach when writing the Songs of Experience, increasing urbanisation with nature being exploited by the Industrial Revolution. The songs that Blake wrote in Experience are clearly giving a negative approach, giving elements of Empiricism, by showing what is real and how it can be improved through the latter book. His work distinctly mirrors a childlike and naive approach, however is then corrupted through experience, becoming a negative world. ...read more.