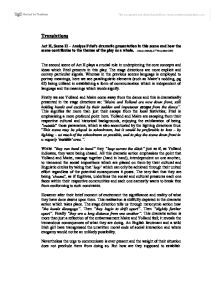 Act II, Scene II - Analyse Friel's dramatic presentation in this scene and how the scene contributes to the themes of the play as a whole.

Translations Act II, Scene II - Analyse Friel's dramatic presentation in this scene and how the scene contributes to the themes of the play as a whole. - Adnan Abidali, 27th November 2003 The second scene of Act II plays a crucial role in underpinning the core concepts and ideas which Friel presents in this play. The stage directions are more explicit and convey particular signals. Whereas in the previous scenes language is employed to portray meanings, here we see paralinguistic elements (such as Maire's nodding, pg 62) being utilised in establishing a form of communication which is independent of language and the meanings which words signify. Firstly we see Yolland and Maire come away from the dance and this is dramatically presented in the stage directions as: "Maire and Yolland are now down front, still holding hands and excited by their sudden and impetuous escape from the dance". This signifies far more than just their escape from the local festivities; Friel is emphasising a more profound point here. Yolland and Maire are escaping from their respective cultural and historical backgrounds, enjoying the exhilaration of being "outside" those parameters, which is also accentuated by the lighting directions thus: "This scene may be played in schoolroom, but it would be preferable to lose - by lighting - as much of the schoolroom as possible, and to play the scene down front in a vaguely 'outside' area.". ...read more.

Language becomes meaningful and beautiful through its phonetic sounds and is used to establish contact, hence taking on a more phatic and emotive function. This idea of the phatic function of language rather than referential function is also emphasised by the "futility" of Yolland's absurd staccato style of talking and the "futility" of Maire's talking in Latin. Regardless of whether Maire speaks Latin or Gaelic, her speech has an equal effect on Yolland. As the two characters continue with their earnest 'conversation' we see that the acoustic sounds of language are employed by Yolland and Maire to seduce each other. A more positive interpretation could be that Freil is pointing out how a mutual feeling such as love can transcend the limits of language and the 'contaminated' conceptual meanings which are attached to it, giving way to an opportunity of reconciliation between two cultural domains. This underpins another central theme - that of a possible rapprochement between the Irish and the English. As mentioned above, a theme of the play is that of the common middle ground shared between both cultures. Friel tries to explore the common factors shared by both in an endeavour to establish that the unifying elements are greater than those that divide. This aspect can be seen in the dramatic presentation of Maire's utterance of the words "water, fire and earth" - the basic elements common to all creation. ...read more.

Now that physical contact has been established, they start talking, the exact nature of which is defined in the stage direction; "each now speaks almost to himself/herself". Even though each is talking in their respective languages, they both say "Don't stop - I know what you're saying". This dialogue leads up to the dramatic climax of this scene - "the kiss". However beforehand its worth noting that Yolland and Maire only understand the emotions being felt; the reality of what they are saying is still obscured under the veil of linguistic imponderability. Yolland wants to stay with Maire in Ireland whereas Maire wants to get away from Ireland. This dramatic presentation reinforces another theme of the play - that of "confusion" which Hugh mentions later on when he says, "confusion is not an ignoble condition". Then we see that they "kiss". This represents a cultural fusion between English and Irish identities. The dramatic irony is that even though they kiss, it's under false pretences, which is implied by the word "always" - this relationship which is symbolic of the fusion of two cultures, is short-lived and doomed. In other words the word "always" implies the exact opposite. I think Friel is voicing his wish for the reconciliation of the English and Irish, but realises the almost "futile" aspiration. In conclusion this scene contributes immensely in underpinning the key themes of this play whilst employing dramatic elements to accentuate them. ...read more.