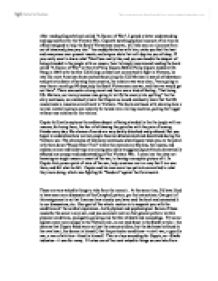 After reading Caputo's book called &quot;A Rumor of War&quot;, I gained a better understanding and appreciation for the Vietnam War

After reading Caputo's book called "A Rumor of War", I gained a better understanding and appreciation for the Vietnam War. Caputo's autobiographical account of his time as officer assigned to help the South Vietnamese recover, will take you on a journey from out of class and place you into " the muddy foxholes with him, make you feel the heat and annoyance ever-present insects, and snipers shots that will deprive you of sleep. If you really want to know what "Nam"was really like, and you can handle the despair of being stranded in the jungle with no reason, then I strongly recommend reading the book called "A Rumor of War" written by Philip Caputo.Before Philip Caputo landed at Da Nang in 1965 with the first U.S Group combat unit committed to fight in Vietnam, he was like most American boys excited about joing the U.S Marines in search of adventure and patriotic desire of serving there country, his mission was very clear, "were going to stay there a month go 90 days,help the South Vietnamese recover, and then we would get out there". ...read more.

I came into the class not knowing an single reason or event of the war, to having a complete picture of it. In Caputo first person point of view of the war, help convince me in a way that I too was there, and felt what he felt. Caputo and his men were true patriots committed to what they were doing, which was fighting for "freedom" against the Communist. These are very valuable things to take from the memoir. At the same time, I'd have liked to have seen more discussion of the Campbell pattern, per the instructions. One goal of this assignment is so that I can see how closely you have read the book and connected it to our discussions, etc. One goal of this whole section is to acquaint you with the conditions of the combat experience-both physical and psychological. Some of these would be the same in any war, and you comment well on that general pattern: terrible physical conditions, youngsters growing old, the fear of death and woundings. ...read more.