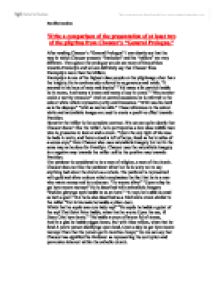 After reading Chaucer's &quot;General Prologue&quot; I can clearly see that the way in which Chaucer presents &quot;frankelyn&quot; and the &quot;millere&quot; are very different. Throughout the prologue

Write a comparison of the presentation of at least two of the pilgrims from Chaucer's "General Prologue." After reading Chaucer's "General Prologue" I can clearly see that the way in which Chaucer presents "frankelyn" and the "millere" are very different. Throughout the prologue we can see more of favouritism towards Frankelyn and we can definitely say that Chaucer likes Frankyelyn more than the Millere. Frankyelyn is one of the highest class people on the pilgrimage other than the knights; He is continuously referred to as generous and noble. "It snewed in his hous of mete and drynke" "Ful many a fat partrich hadde he in muwe, And many a breem and many a luce in stuwe." "Was nowher swich a worthy vavasour" And on several occasions he is referred to the colour white which represents purity and innocence. "Whit was his berd as is the dayesye" "whit as morne milk." These references to the colour white and naturalistic images are used to create a positive effect towards Franklyn. ...read more.

But with thise relikes, whan that he fond A povre person dwellynge upon lond, Upon a day he gat hym moore moneye Than that the person gat in monthes tweye;" So we can say that Chaucer has signified the Pardoner as representing the corruption and perversion inherent within the catholic church. The miller is described using the colours red and black which symbolises frugality and wickedness. "His berd as any sowe or fox was reed," "Reed as the brustles of a sowes erys;" "His nosethirles blake were and wyde." "His mouth as greet was as a greet forneys" And now instead of the negative naturalistic imagery Chaucer uses for the miller he has changed to industrialistic imagery still creating an unlikeable character. The wife of bath is also refered to as red but not in the same way as the miller is. She is referred to red as a sign of lust passion and also could be danger. ...read more.

The Millers similes again are contrast to Franklyn's they are all again negative naturalistic images and negative industrialistic images "His mouth as greet was as a greet forneys" "as any sowe or fox" "as though it were a spade" The wife of bath is different though she is described as being "As brood as is a bokeler or a targe" which is militaristic and kind of send out a warning aswell as her red description. She is also described as gap-toothed which in the 1300s meant that she was well experienced with cohabitation. "Gat-tothed was she, soothly for to seye" "Not counting other company in youth;" In conclusion there are many differences between the characters in Chaucer's "General Prologue" Franklyn is seen to be the most honourable, but the rest are portrayed as thieves the wife of bath marring old men and waiting for them to die in order to gain their money. The pardoner scamming people into believing their sins were forgiven if the bought fake items off him and the miller who would tip the scales in order to get himself more money. ?? ?? ?? ?? Ben Shelmerdine ...read more.