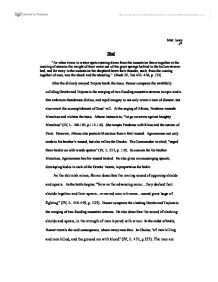 After the divinely swayed Trojans break the truce, Homer compares the wrathfully colliding Greeks and Trojans to the merging of two flooding mountain streams an epic simile that embraces thunderous diction, and rapid imagery to not only create a tone of d

Matt Jones 4th Iliad "As when rivers in winter spate running down from the mountains throw together at the meeting of streams the weight of their water out of the great springs behind in the hollow stream-bed, and far away in the mountains the shepherd hears their thunder, such, from the coming together of men, was the shock and the shouting." (Book IV, line 452- 456, p. 125) After the divinely swayed Trojans break the truce, Homer compares the wrathfully colliding Greeks and Trojans to the merging of two flooding mountain streams an epic simile that embraces thunderous diction, and rapid imagery to not only create a tone of disaster, but also reveal the accomplishment of Zeus' will. At the urging of Athene, Pandaros wounds Menelaos and violates the truce. Athene instructs to, "let go an arrow against haughty Menelaos" (IV, L. 100-103, p.115-116). She tempts Pandaros with Kleos and the esteem of Paris. ...read more.

In the midst of battle, Homer reveals the cold consequence, whom many men face. In Cholos, "of men killing and men killed, and the ground ran with blood" (IV, L. 451, p.125). The men are fighting, and striving for Kleos as they are in the middle of battle. In addition Homer arranges a cause and effect situation by stating that once they had encountered one another, it rapidly lead to a bloody death. Actually, two similes embrace the epic simile. The encompassing effect, "when rivers in winter spate running down from the mountains throw together at the meeting of streams the weight of their water." The diction of the first creates an image of formation, by identifying the meeting and energy of the water, just as the Greeks and Trojans charge and forcefully smash together. ...read more.

544, p.127). Homer reveals the sad consequence of war. He also embraces the fact that these men have failed to come home. Homer clearly reveals the subtle accomplishment of Zeus' will through the epic simile. Zeus, "let us consider...whether again to stir up grim warfare and the terrible fighting" (IV, L. 15-16, p. 113). Zeus is debating whether to resume the war or to stop battle forever. He obviously chooses to continue the horrible war on the Achaians and Trojans. The sending of Athene, protector of the Achaians to induce the breaking of the truce, is what starts the battle. Athene, "visit horrible war again on the Achaians and Trojans...make it so that the Trojans are first offenders" (IV, L. 65-67, p. 115). As Athene divinely intervenes with the Trojans, she persuades them with lies. Homer sets up irony here, for the fact that Athene is a protector of Achaians, but she is sent to start a war, and the Trojans are the ones to start it. ...read more.