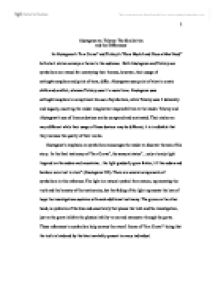 Akutagawa vs. Tolstoy: The Similarities and the Differences

Akutagawa vs. Tolstoy: The Similarities and the Differences In Akutagawa's "In a Grove" and Tolstoy's "How Much Land Does a Man Need" both short stories conveys a theme to the audience. Both Akutagawa and Tolstoy use symbolism as a vessel for conveying their themes, however, their usage of setting/atmosphere and point of view, differ. Akutagawa uses point of view to create shifts and conflict; whereas Tolstoy uses it to assist tone. Akutagawa uses setting/atmosphere to compliment his use of symbolism, while Tolstoy uses it delicately and vaguely, asserting the reader imaginative responsibilities to the reader. Tolstoy and Akutagawa's use of literary devices can be compared and contrasted. Their styles are very different while their usage of these devices may be different; it is irrefutable that they increase the quality of their works. Akutagawa's emphasis on symbolism encourages the reader to discover themes of his story. In the final testimony of "In a Grove", the samurai states"...only a lonely light lingered on the cedars and mountains...the light gradually grew fainter, till the cedars and bamboo were lost to view" (Akutagawa 510). There are several components of symbolism in this reference. The light is a natural symbol from nature, representing the truth and the honesty of the testimonies, but the fading of the light represents the loss of hope the investigations sustains with each additional testimony. ...read more.

"In a Grove" is broken down into various testimonies. All of them contain a first-person perspective of the events according to that character. Through one testimony from the wife, "neither conscious nor unconscious, I stabbed the small sword through the blue-colored kimono into his breast" (508), is much different in nature and content then that of Tajomaru's Confession. Tajomaru confesses, "in front of [him] was shining the small sword...[he] took it up and stabbed it into [his] breast" (509). The difference between these two testimonies is not only who is accountable. The entire nature of their stories conflict each other. The reader must shift his mindset frequently, referring to previous testimonies and questioning the integrity of their accounts. The reader takes on a detective-like role as he tries to make sense of the testimonies and discerning truth from falsehood. However, Tolstoy uses point of view for a different purpose. Tolstoy, on the other hand, offers little opinion in his story. It is told mostly in the third-person and with little outlook aside from occasional insight on Pahom's inner conflict. Through the beginning of the story, "the Devil had been sitting behind the stove, and had heard all that was said" (215). ...read more.

Each, though very different, compliment their stories in perfect form. Tolstoy and Akutagawa's applications of literary devices are somewhat similar yet mostly different. Although Akutagawa uses more complex symbolism than Tolstoy, symbolism was used to accomplish the same result. Both help the reader in understanding the theme or significance behind the story. Akutagawa uses point of view as a means of creating complexity and controversy. The rare style Akutagawa achieves through his testimonies is what allows for his entire message. The controversial account given through first-person narration is what assists the readers to identify disagreeing details and information necessary in understanding the story. Tolstoy's goal for point of view is to support the tone and to allow the reader to envision himself in the story. "In a Grove" compliments its symbolism through its setting. Tolstoy's use is almost the opposite. Purposely leaving out crucial details, Tolstoy was able to achieve two important ideas. He allows the reader to elaborate on the story while also maintaining the focus of the piece. The divergence of land is clearly the main conflict of the story. This is Tolstoy's objective. He desires the message of his story to be as clear as crystal. When evaluating the piece, the theme is apparent and applicable in both short stories, although both authors have two very different styles of writing when it comes down to using the literary devices. ...read more.