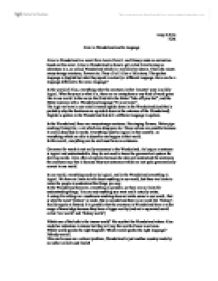 Alice in Wonderland and its language

Jung-In Kim TOK Alice in Wonderland and its language Alice in Wonderland is a novel from Lewis Carroll, and Disney made an animation based on this novel. Alice in Wonderland is about a girl called Alice having an adventure in a, so called, Wonderland which is a world in her dream. There she meets many strange creatures, flowers etc. They all tell Alice a little story. The spoken language is English but what they speak is actually a different language. How can be a language different to the same language? In the world of Alice, everything what the creatures in that 'country' says is solidly logical. ...read more.

English is spoken in the Wonderland but still a different language is spoken. In the Wonderland, there are many strange creatures, like singing flowers, Water pipe smoking Caterpillar, a cat which can disappear etc. Those actions are possible because it can be described in words. Everything must be logical in that country , so everything which are able to describe can happen in that world. In this world , everything can be said must have an existence. Grammar for words is not really necessary in the Wonderland. As long as a sentence is logical and understandable, they do not need to know the grammatical system for deriving words. ...read more.

A caterpillar sitting on a mushroom smoking does not make sense in our world , that is why the word 'fantasy' is made, But in wonderland there is no word like 'fantasy'. Reality equals to fantasy. It is possible that the creatures in Wonderland have a wider range of knowledge because they have a bigger reality (and not a separated world called 'real world' and 'fantasy world') Which one of the both is the insane world? We say that the Wonderland where Alice made her adventure is insane but they will say the world of ours is not sane. Which world speaks the right English?, Which world speaks the right language? Nobody can tell. This can be seen as a cultural problem, Wonderland is just another country made by an author called Lewis Carroll. ...read more.