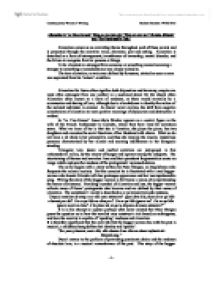 Alienation in 'Le Vice-Consul', 'Elise ou la vraie vie', 'Pluie et vent sur T�lum�e-Miracle' and 'The Handmaid's Tale.' Alienation occurs as an overriding theme throughout each of these novels and is presented through the narrative voice, character, plot and setting. Alienation is described as a form of estrangement; transference of ownership; mental disorder, and the failure to recognise familiar persons or things. To be alienated or estranged from someone or something means becoming a stranger to something or somebody one was closely related to. The term alienation, as was once defined by Rousseau, started as soon as man was separated from his 'natural' condition. Alienation for Duras often signifies both disjunction and harmony, couples are most often estranged from one another in a sustained desire for the absent other. Alienation often occurs as a form of madness, as there would normally be a communion and sharing of love, although due to a breakdown in identity the notion of the isolated individual is created. As Duras' novel evolves, the shift from negative connotations of alienation to more positive meanings of disjunction and destruction is evident. In 'Le Vice-Consul' Anne-Marie Stretter appears as a central figure as the wife of the French Ambassador to Calcutta, where they have lived for seventeen years. What we learn of her is that she is Venetian, she plays the piano, has two daughters and executes the social functions of her Husband with charm. What we do not learn a lot about is her personality, and thus she remains the elusive, mysterious presence characterised by her silence and seeming indifference to her bourgeois standing. Triangular love, desire and morbid eroticism are juxtaposed, in this ambassadorial milieu, by the misery of hunger and leprosy among the indigents. The intertwining of themes and narrative lines and their persistent fragmentation create an image which captures the madness of the protagonists' repressed desires. The novel begins with a story written by Peter Morgan, an Englishman who frequents the colonial society. ...read more.

It is not surprising therefor that �lise does not pose as a frame for other characters, but they are there to frame �lise. Her consciousness is definitely raised and the reader would not want to relate to her, given the pathetic image that she portrays. Lucien's reacts to Marie-Louise's persistence in a hostile manner, and when she asks him to go for a walk in the evening, he responds by asking �lise to go with them. "Bon, avait-il soupir�, je prends ta veste. �lise! Viens, nous allons faire un tour." Lucien appears to be incapable of handling the situation on his own, and this echoed in the comment that he makes above. When �lise moves to Paris it is here that she finally makes the decision to live a life of her own, instead of living her life for someone else. It is during �lise's first day of factory-work that we are presented with the subject of alienation, in the form of estrangement from one group to another. It is the first instance where �lise experiences r****t behaviour, demonstrated by Daubat towards the Algerian factory workers, who also demonstrate similar behaviour towards her. Daubat, is one of the few French workers, who �lise has been given in charge to. Immediately expressing his dislike at the fact that there is another woman working there. His welcoming words to her are: "C'est les femmes maintenant?" An Arab worker who in an attempt to form a superficial alliance with Daubat, echoes his s****t comment and observation, and given a rather brusque reply. "Oui, et apr�s? Travaille, t'as d�j� une voiture de r****d." It is made quite evident that there exist different prejudices within the workforce, all of, which cause the individual to feel, alienated. �lise is excluded from the group of women that she is working with, and is made to feel every isolated. "Les autres femmes ne me parlaient pas encore. ...read more.

She is alienated from them as a group. But is made welcome by certain characters. Conclusion Characters defined by alienation are associated with one another in a subtle breakdown of the notion of the discrete character. This fragmentation breaks up the text into segments of longings and alienation, thus contributing to the tenuous atmosphere of prolonged. What is evident in each of these novels is that alienation's main cause is estrangement from one's own roots and ancestors, essentially from their past. If this past has had a negative effect both spiritually and psychologically it causes the person to feel alienated from themselves and from others. It is important to overcome the past, to free oneself, and to accept not only the positive parts of it but also the negative parts. Without this acceptance, and individual in incapable of being successful later in life in their personal life. Discovery of self, self-realisation helps to overcome alienation from hers. Becoming a stranger to something or somebody who one is closely related to, may also apply to situations where a union between two people has never existed. Alienation occurs because the individual concerned feels that it should exist, because this union constitutes an ideal or a necessity of a happy or meaningful 'normal life.' If this close relationship has never existed, then why must one feel alienated from something that has never existed? It is because of such ideals that individuals have the misfortune of becoming and feeling estranged. There are three main areas of alienation: self-alienation, social alienation and group alienation. The characters that have been discussed in these novels all appear to suffer from self-alienation and this may often be the result of social alienation. It is often the society in which an individual lives that causes them to feel they are lacking and that they are estranged from that society. It is because of the ideals that the society imposes on an individual that they are caused to feel alienated. Contemporary Women's Writing Student Number: 993167616 - 1 - ...read more.