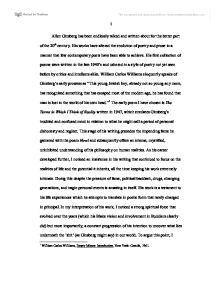 Allen Ginsberg has been endlessly talked and written about for the better part of the 20th century.

Allen Ginsberg has been endlessly talked and written about for the better part of the 20th century. His works have altered the evolution of poetry and prose in a manner that few contemporary poets have been able to achieve. His first collection of poems were written in the late 1940's and ushered in a style of poetry not yet seen before by critics and intellects alike. William Carlos Williams eloquently speaks of Ginsberg's early prowess as "This young Jewish boy, already not so young any more, has recognized something that has escaped most of the modern age, he has found that man is lost in the world of his own head."1 The early poem I have chosen is The Terms in Which I Think of Reality written in 1947, which emulates Ginsberg's troubled and confused mind in relation to what he might call a period of personal dishonesty and neglect. This stage of his writing precedes the impending fame he garnered with the poem Howl and subsequently offers an intense, mystified, uninhibited understanding of his philosophy on human realities. As his career developed further, I noticed an insistence in his writing that continued to focus on the realities of life and the potential it inherits, all the time keeping his work extremely intimate. ...read more.

The first section seems to outline Ginsberg's philosophy of reality, as the title suggests. The first three lines "Reality is a question/ of realizing how real/ the world is already" gives the reader an abrupt introduction to a metaphysical theory of reality. Believing that the world is entirely real would lead to the assumption the world is physically real. This is followed by a paradoxical statement in the line "Time is Eternity" and then "ultimate and immovable" which essentially begins to progress the poem forward in its purpose. The philosophy of reality being "Heaven's mystery/ of changing perfection" is conveying the message that reality changes as does time and eternity. He gives evidence of this in the lines "absolutely Eternity changes!/ Cars are always going down the street,/ lamps go off and on." He uses these mundane examples for such a significant event (Eternity changing) as an attempt to simplify his complex theory. In the line "everyone's an angel" Ginsberg portrays his deep affection for human life under the unfortunate reality that not all believe this to be true, which is revealed in the third section of the poem. ...read more.

The humor involved in this poem brings out undertones of expanding social consciousness which is such a prominent element in his work, early or late. I chose this poem to show how Ginsberg's latest poetry is more of an urging process where nothing is sacred or mystified. His life became uneventful compared to the 1950's, 60's, and 70's and because he was a poet that didn't separate form from content (or life from art), his poetry revealed something was missing. Yet, everything and anything was still talked about in order to challenge the mind. The inspiration of the Beat Generation was gone and political activism was at an all-time low during the impending years of his death, but he remained true to his poetic principle "First thought, best thought". By not choosing any of Ginsberg's most analyzed and famous poems (Howl or Kaddish), his growth as a poet was more difficult to extract, yet I believe that the choice of poems clearly represents a distinction in two vastly different eras of his literary career. 1 William Carlos Williams, Empty Mirror: Introduction, New York: Cornith, 1961. 2 Thomas F. Merrill. Allen Ginsberg: Revised Edition. Boston: Twayne Publishers, 1988, 10. 3 Merrill, 9. 4 Merrill, 2. 5 Concerning the origin of Dialectics among the thinkers in Ancient Greece and China. 6 Merrill, 15. 1 ...read more.