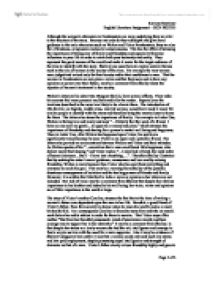 Although the women's characters in Frankenstein are more underlying they are vital to the structure of the story.

Although the women's characters in Frankenstein are more underlying they are vital to the structure of the story. Because not only do they add depth and give moral guidance to the male characters such as Walton and Victor Frankenstein, they are also full of kindness, compassion and social consciousness. This has the effect of stressing the importance of taking care of family and friendship and especially feminine influences in your life in order to retain both your humanity and sanity. They represent the good women of the world and make it easier for the target audience of the time to identify with the story. Shelley also uses them to explore several themes such as the role of women in the society of the time. For example the way women were judged and valued only for their beauty and/or their usefulness to men. That the women in Frankenstein are not given a voice and that they seem not to have any opinions or power over their future, may be a comment from Shelley about the injustice of women's treatment in her society. Walton's letters to his sister Mrs Margaret Saville, have several effects. They make his account feel more personal and believable for the reader. ...read more.

as "her hair was of the brightest living gold,..." "...her blue eyes cloudless,..." and she was "...fairer than a garden rose among the dark-leaved brambles." So it is her beauty and the aforementioned rumours of a noble birth that save Elizabeth from a life of poverty. That she is given to Victor as a "...pretty present..." and Caroline's wish that they should someday marry, is a further example of women's lack of power over their futures. Elizabeth is a vital character in the novel as she provides a contrast within the Frankenstein family by which to compare Victor. Indeed Victor admits that she "...was of a calmer more concentrated disposition;..." than himself while his "...temper was sometimes violent..." and his "...passions vehement,...". Indeed, it is Elizabeth who takes motherly responsibility for the household when Caroline dies. However, despite this great responsibility she has little or no power. We also see the depth of Victor's selfishness and disregard for others when despite the Creature's threat to kill Elizabeth should Victor marry her, he goes ahead with it still. This action begs the question; if he loved her at all why marry her and put her in mortal peril? ...read more.

Safie's story also gives the Creature hope as he sees that although her father was very unkind to the DeLacey family they welcome her into their home all the same. It is also a classic romantic tale of how love can conquer all, which would have appealed to the readership. In conclusion, I do not agree that the women in Frankenstein play an insignificant part in the story. Indeed without them the male characters would lack depth and the novel would have been less appealing to its audience. They bring the far away and foreign locations closer to home and make what is often an unbelievable story more believable. Without Safie's character the Creature would not have been able to learn so easily or convincingly. Also Shelley's views about women's contribution to the balance of society, their relative lack of power, freedom or control over their future's when compared to men could not have been expressed so strongly. Her point that society tends to judge people by appearances and wealth rather than their moral character and the misconceptions this causes could not have been made so convincingly. Overall I believe the story is strengthened and made more complete by their existence. Kariann Mortimer English Literature Assignment - OCN 20C/21D Page 1 of 3 ...read more.