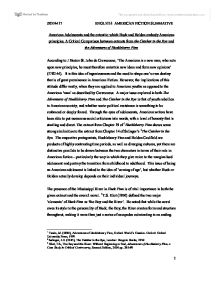 American Adolescents and the extent to which Huck and Holden embody American principles. A Critical Comparison between extracts from the Catcher in the Rye and the Adventures of Huckleberry Finn According to J Hector St. John de Crevecoeur, 'The American is a new man, who acts upon new principles; he must therefore entertain new ideas and form new opinions' (1782:44). It is this idea of ingeniousness and the need to shape one's own destiny that is of great prominence in American Fiction. However, the implications of this attitude differ vastly, when they are applied to American youths as opposed to the American 'man' as described by Crevecoeur. A major issue explored in both The Adventures of Huckleberry Finn and The Catcher in the Rye is that of youth rebellion in American society, and whether socio-political resistance is something to be embraced or deeply feared. Through the eyes of adolescents, American writers have been able to put numerous social criticisms into words, with a level of honesty that is startling and direct. The extract from Chapter 19 of 1Huckleberry Finn shows some strong similarities to the extract from Chapter 14 of Salinger's 2The Catcher in the Rye. The respective protagonists, Huckleberry Finn and Holden Caulfield are products of highly contrasting time periods, as well as diverging cultures, yet there are distinctive parallels to be drawn between the two characters in terms of their role in American fiction - particularly the way in which they give voice to the marginalised adolescent and portray the transition from childhood to adulthood. ...read more.

As made clear in the passage through Huck's contented language, life away from politics and the public is what he values most. During the course of the novel, he finds himself constantly at odds with nineteenth century American society, favouring free will and liberty over the hypocritical laws of civilisation, which acknowledge slavery and r****m as part of their way of life. Huck rejects these ideals, in favour of the most American of principles; those contained in 'The Declaration of Independence', that state: 'all men are created equal, that they are endowed by their Creator with certain unalienable Rights, that among these are Life, Liberty and the pursuit of Happiness'. Huck's escape on the River is a mission in which he seeks to attain all of these values, in spite of a farcical society (Wieck, 2004:3). One of the key similarities between Twain and Salingers' representations of the rebellious American adolescent can be found by comparing the language and narratives of the respective texts. Both Twain and Salinger use first person retrospective narratives combined with teenage slang; the resulting effect is that the protagonists are granted instantly recognisable voices and personalities, thus forming an intimate relationship with their readers (Graham, 2007). Holden's mention of BB guns (p.89) and Huck's remark about frogs laying eggs (p.110) serves not only to create a humorous effect, but allows the adolescent character to connect with the perceived adult reader, thus encouraging the reader to acknowledge the protagonists' words and recognise their existence. ...read more.

Unlike Huck, Holden's immaturity and refusal to change mean that he is unable to "draw any conclusions from his experience" (Hassan, 1961). As previously mentioned, Holden's uncertainty over what he actually seeks is the likely factor in this outcome. To conclude, it is clear that comparisons can be drawn between the two passages, which reflect wider issues in the respective texts. The American attitude that is epitomised by the quest for liberty and new ideas is explored to a great extent in both novels. Both Huck and Holden exemplify the rebellious adolescent, and demonstrate what happens when a member of American society fails to agree with the social norm. In Catcher and Huck Finn, both Holden and Huck attempt to break free from the "phony" and hypocritical societies, which they are reluctantly a part of. However, in doing so, these two adolescents gain contrasting experiences, which impact very differently on their character development. Huck escapes away from civilisation, and as such is liberated. Holden, on the other hand, has conflicting intentions, and by escaping the city he is neither liberated nor calmed. Perhaps the message that can be drawn from the two texts is that there is a line between the American values of liberty and the pursuit of happiness, and social resistance. Huck is more aware of what he seeks, and so seems to be more enlightened, while Holden has conflicting goals, which prevent him from ever being happy. As evidenced, the idea of the 'American Man' and the values associated are something that may be difficult for the typical adolescent to comprehend and apply to their own life. ...read more.