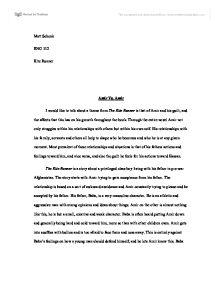 Matt Schenk ENG 112 Kite Runner Amir Vs. Amir I would like to talk about a theme from The Kite Runner is that of Amir and his guilt, and the affects that this has on his growth throughout the book. Through the entire novel Amir not only struggles within his relationships with others but within his own self. His relationships with his family, servants and others all help to shape who he becomes and who he is at any given moment. Most prevalent of these relationships and situations is that of his fathers actions and feelings toward him, and vice versa, and also the guilt he feels for his actions toward Hassan. The Kite Runner is a story about a privileged class boy living with his father in pre-war Afghanistan. The story starts with Amir trying to gain acceptance from his father. The relationship is based on a sort of awkward avoidance and Amir constantly trying to please and be accepted by his father. His father, Baba, is a very masculine character. He is an athletic and aggressive man with strong opinions and ideas about things. Amir on the other is almost nothing like this, he is but a small, creative and weak character. ...read more.

Amir goes to find him. Hassan, while retrieving the kite, is confronted by a bully who is often causing trouble with the two. The bullies go as far this time as to r**e the servant Hassan. Amir is there to witness this but is once again too timid to face them to help his "friend" and flees. He acts like he did not know what had happened to Hassan but never knew if Hassan had seen him or not, this I believe haunted him. The guilt that he felt toward what happened to his friend and him not even attempting to help, when he is almost for certain that had it had been him Hassan would have tried to help. Maybe he would of failed but he would of tried to save his friend and master. Amir's guilt is very clear in the book as right after the incident he shuts himself down. He stays in his room for days and avoids Hassan. He also tries to get him thrown out of the house because he can't stand to be around Hassan. This further enhanced the idea that Amir was a coward that had been set into his mind by his father his whole life, the feelings inferiority and the guilt will stay with him for much of the book and more. ...read more.

A child begins to believe what the father figure is saying to him, if Amir thought that his father saw him as weak then Amir believed that he was weak. His guilt for not being able to help Hassan is right but even if he had tried to there was no way he could of done anything. It's a hard thing to sort out, while Hassan would of tried he would of failed too and Amir knew he would fail. But the fact Hassan would at least attempt it, is what makes Amir feel so bad I think. A question I had is: Is it that Hassan was so much more willing to help his friend whether he could or not? Or was it that his emotions would have just taken over, blocking out his logical thought of "there is nothing you can do" while Amir's thought of that got through to him? I think Amir didn't think of it like that, and it tore him up that he did not reciprocate the strength of the bond between Hassan and him. Overall a lot of Amir's issues stem from circumstances that were not in his control. This reminded me a lot of Frankenstein and the way the same sort of psychology applies to the monster. They both are forced into life choices they would not normally want. ...read more.