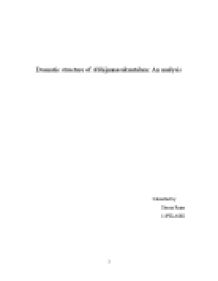 An analysis of the dramatic structure of Kalidasa's &quot;Abhinjanasakunthalam&quot;

﻿Dramatic structure of Abhijnanasakuntalam: An analysis Submitted by Sherrin Rajan 11/PELA/002 The Abhinjanasakunthalam is regarded as the very first Indian play to be translated into a western language. After the translation by Sir William Jones, there were about forty six translations in twelve European languages. Some English translations are ?The Fatal Ring: an Indian drama? by Sir William Jones, ?The Lost Ring: an Indian drama ?by Sir Monier Monier Williams and ?Sakuntala and other works? by Arthur W. Ryder. In the thesis by Tripti Mund , it is mentioned that the Abhinjanasakunthalam contains over two hundred verses. These verses are mostly uttered by the major characters. The language spoken by them is Sanskrit. The division of language spoken by the character is according to the social status. Vidushaka speaks Prakrit, Maharastri is spoken by high class women, children and royal servants. The other attendants of the royal palace speak Magadhi. The low class people like cowherds, robbers, gamblers speak varieties of prakrit like Abhiri, Paisaci and Avanti. ( Mund 24, 25) The themes for any Sanskrit play are usually from history or epic legend. ...read more.

The trumpet flower and the shade induced sleep at the end of a playful day have resonances to the love episode in act three. The nati?s song ? ?Softly, softly bees kiss The filament?s tender crest Of the sirisa flower Adorning gentle, sensuous women? (4) (Lockwood & Bhatt21) On a basic level of meaning the song just implies the movement of bees around the crest of the sirisa flower which are worn by women. Nati gives an erotic note to this where the bee represents a passionate lover kissing his beloved. Structure of Sanskrit drama is identified in five stages, called Avasthas or states of mind in plot movement. The five Avasthas are ?Aarambh or the beginning, Yatna or the effort (to bring out the rasa), Prapthyasha or the prospect, Niyatapti or the removal of obstacles, Phalagam which refers to obtaining the desired result? (Sanskrit drama ? introduction). In Sakuntalam the linearity of this structure can be traced. Aarambh or the beginning is the Nandi or the invocation and the subsequent prologue, Yatna is to be seen at the point where Dusyanta and Sakuntala falls in love and their romance intertwined in the sentiments of sringara, both vipralambha and samyoga, Prapthyasha could consist ...read more.

There is the benediction (Nandi) and the Bharatavakya as in the other plays. At the end of the prelude, Dusyanta who is a hero of the Dhirodatta class begins the play. Their union in marriage is the focus and the whole plot is to be rallied towards achieving this goal. On a general note, Sakuntalam is said to be the most widely read work of Kalidasa, like Raghuvamsa. It is a love drama belonging to the class of Rupakas which is known as ?Nataka?. It is said to be highly elegant in language and style and consists of beautiful similes and comparisons. ?The metres are fairly shorter and musical.? ( Kale 53) The solid proof of the plays superior nature in its language and story is the very fact that it has been translated into various languages across the globe invariable of the limitations it might face in terms of tradition and culture reflected in the plot. The play however is indicative of the various conventions of Sanskrit drama and the structure of Sanskrit drama is more or less followed showing justice to the story in Vyasa Mahabharata. ...read more.