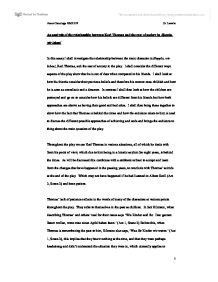 An analysis of the relationship between Karl Thomas and the rest of society in Hoppla, wir leben!

An analysis of the relationship between Karl Thomas and the rest of society in Hoppla, wir leben! In this essay I shall investigate the relationship between the main character in Hoppla, wir leben!, Karl Thomas, and the rest of society in the play. I shall consider the different ways aspects of the play show that he is out of date when compared to his friends. I shall look at how his friends consider their previous beliefs and therefore his current ones childish and how he is seen as unrealistic and a dreamer. In contrast I shall then look at how the children are portrayed and go on to consider how his beliefs are different from his friends but how both approaches are shown as having their good and bad sides. I shall then bring these together to show how the fact that Thomas is behind the times and how the audience relate to him is used to discuss the different possible approaches of achieving and ends and brings the audience to thing about the main question of the play. Throughout the play we see Karl Thomas in various situations, all of which he deals with from his point of view, which due to him being in a lunatic asylum for eight years, is behind the times. ...read more.

their side for being stupid enough to think they could win the war when they were so outnumbered (Act 2, Scene 1). In Thomas' reasoning, however, being outnumbered gives nobility to the fight - as we can see from his focus upon 'die Tat' as a means to bring about change, one his friends do not agree with. In fact he seems to be more similar to the right-wing student in that respect, another example of childish impulsiveness, perhaps, as the student is not portrayed as someone wise with a full appreciation of their circumstances. From the start Thomas seems appalled that his friend's have lost their revolutionary zeal and seems bent on starting a revolution single-handed. When Thomas expresses the idea that Kilmann cannot change things from a position of power within the establishment Kilmann tells him that 'Das Leben spult sich nicht in Theorien ab. Man lernt aus seinen Erfahrungen.' (Act 1, Scene 2). A message repeated to him both by Berg and Kroll. However, it seems Thomas does not learn and he regularly puts forward the former ideas of die Tat and die Masse which are written off by others as useless and non-existent respectively. ...read more.

This coincides with the idea of Thomas as a dreamer who thinks in terms of abstract ideas and fanciful ideas that have no basis in reality. On the other hand it is also suggested that perhaps not having dreams or abstract ideals to follow means that nothing will happen and things will stagnate - perhaps wisdom is really just acceptance of the situation? And it also depicts children as having internalised the new way of thinking and being objective about things instead of being impulsive and impatient but not necessarily accepting their situation. Overall, despite the fact Thomas is the main character and we should therefore relate to him to a greater extent than any of the other characters, we see him as old fashioned and also stubborn enough not to listen to people who have been experiencing what he has not for the last eight years. We do not necessarily adopt his ideals and viewpoint, but we also do not dismiss them out of hand. We see the arguments for and against the different approaches to change being weighed up in the play and we see the way Thomas is portrayed as equally ambiguous. We do not love him or hate him as we are too busy considering the greater good and which is the best means of achieving it. ...read more.